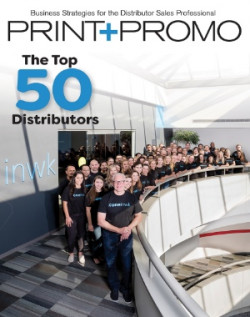 It was a good year to be a distributor in the print and promo space. According to our data, overall revenue for the 2018 Top 50 totaled $3.58 billion for the most recently completed fiscal year, a 2.61 percent increase over our 2017 list’s $3.50 billion tally. That number would have been even higher if it had included numbers from SI Solutions Inc. (now part of The Sourcing Group), thumbprint, DataSource and other leading distributors that declined to report their earnings to us directly.

Of the 47 returning distributors:

Those who have been tracking our lists will recognize the familiar names comprising the top five. With the exception of Proforma, which finished evenly, all enjoyed financial gains—the largest belonging to InnerWorkings Inc. The Chicago-based firm tacked an additional $47.7 million to last year’s totals. From our vantage point, 2018 proved to be quite the year for InnerWorkings. The billion-dollar-plus firm was no stranger to headlines ... not all positive. There was the C-suite shake-up, starting with the resignation of Chief Financial Officer Jeffrey P. Pritchett. As published in a press release, Pritchett’s immediate departure was due to personal reasons unrelated to the company’s “business, operations, financial performance or financial reporting.” In February, it was announced that Rich Stoddart would be succeeding longtime InnerWorkings President and CEO Eric Belcher, the latter of whom was transitioning to the role of executive chairman of the board of directors. Stoddart previously served as global president of Leo Burnett Worldwide, touted as one of the world’s largest and most awarded global advertising agencies.

Then, things got even more interesting. On May 7, InnerWorkings revealed that it would restate its historical financial statements for fiscal years ending Dec. 31, 2017, 2016 and 2015, along with all interim periods within those time frames, due to accounting errors. In a statement, the company maintained that the mistakes related “primarily to recording a portion of costs of goods sold in the wrong period, and have no material impact on InnerWorkings’ cash flow, revenue or liquidity.” As a result, the company also delayed the release of its first quarter 2018 financial results and conference call, prompting NASDAQ to send a noncompliance letter.

Since the news broke, the distributorship announced some major contract expansions, most notably with a major player in the beer, wine and spirits vertical; and another with a leading manufacturer of consumer goods, specializing in cleaning products.

In the meantime, here are a few other fun stats we saw in our analysis:

Sponsored Content Uncommon Sense: How to Achieve Independence Without Isolation in the Promo World

Success Advice from Paul Bellantone, President and CEO of PPAI