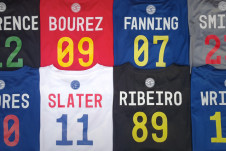 Sports fans love to show their devotion (literally) on their sleeves. Heck, as we saw yesterday, some people own multiple shirts for the same teams. This shouldn't come as much of a shock. According to a study by Market Research Reports, professional sports leagues, including the NFL, NBA, MLB and NHL, lead the U.S. market for licensed sports merchandise.

The report attributes this statistic to the escalating retail sales of licensed sports products, which are spurred by ever-growing popularity of televised sporting events. The report also detailed specific companies that lead the market—VF Corp., Reebok, Adidas, Nike, G-III Apparel and Jarden Corp.

And while much of this growth in the market is due to fans purchasing jerseys or T-shirts, not every athlete wears a uniform. While it's easy for fans of sports, like football and baseball, to show their team spirit through T-shirts or jerseys, it's not as easy for fans of alternative sports, like surfing. But now, the World Surfing League (WSL) is letting surf fans show their support by releasing its first line of licensed apparel.

According to WWD, to commemorate the league's 40th anniversary, the WSL is launching apparel similar to other leagues' T-shirts that each feature a team name on the front, and a player's name and number on the back. So, instead of seeing T-shirts for Steph Curry or Peyton Manning, surf fans can get their hands on Mick Fanning or Kelly Slater gear.

"It's something we've talked about for a few years," Tyler Wright, the WSL's top-ranked female surfer, told WWD. "And to start this season and see a bunch of fans wearing the jerseys and supporting the athletes is a great experience."

Speaking of alternative sports, some have started conversations that competitive video gaming could be compared to traditional sports. You can even read about professional gaming, or "e-sports," on ESPN. According to the Market Research Report statistics, the video game segment is expected to grow in the near future, in terms of licensed sportswear. Could we see more traditional jersey or T-shirt sales for e-sports teams in the future?