Promotional Products Might Get Richard Simmons Out of Hiding 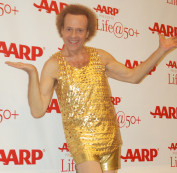 Richard Simmons might come out of hiding after new merchandise launches. (Image via Angela George/Wikimedia Commons)

For those who might be a bit out of the loop: Richard Simmons (yes, the "Sweating to the Oldies" Richard Simmons) was kind of missing for a few years.

The once in-your-face fitness guru fell off the face of the earth, much to his friends' and clients' concern. It reached a point where there was a whole podcast centered around solving the mystery.

A police investigation last month, during which the Los Angeles Police Department said that Simmons is fine and just keeping to himself, solved the mystery to an extent. But it still didn't make sense to a lot of people why he's gone into hiding.

According to The New York Times, Promient Brand + Talent, a management company run by Simmons' manager, announced last week that it acquired exclusive rights to represent Simmons for merchandising, endorsements and licensing opportunities.

In addition, Michael Catalano, Simmons' manager, said that his client might be willing to step back into the public eye to promote products. If he does, this would be the first time February 2014, when he stopped showing up to teach his class in Beverly Hills, Calif.

"We're talking about inspiration-themed products that will hopefully accomplish what Richard really set his life's work to do, which is help people take better care of themselves," Catalano told The New York Times. "We're not licensing tires and party hats."

Catalano added that he wasn't entirely thrilled with the "Missing Richard Simmons" podcast, in which a friend and former Slimmons client hunted for the truth behind Simmons' disappearance, but he did say that it helped Simmons' brand awareness.

"Certainly I would say, without a doubt, a younger demo is aware of Richard as a result," Catalano said. "At the end of the day, if it helps deliver his message to people who were unaware of it previously, fantastic. That's what Richard's mission has always been."

There's still plenty of mystery in this story, but if these branded items cause the reclusive Simmons to step back into the world, that's a pretty big deal.