How Some Professional Athletes Are Giving Back Through Branded Merchandise 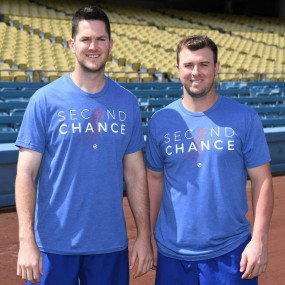 Because of their incredible skills and often exorbitant salaries, sports fans expect athletes to give them so much, namely, among other endowments, stellar efforts, bragging rights and coveted championships. While onlookers’ respect for performers increases as they chase loose balls, defeat rivals and inspire parades, the professionals also earn kudos for keeping causes close to their hearts, and through branded merchandise options, stars and budding contributors alike are helping various organizations all committed to leveling the figurative playing field by raising funds and donating portions of their sales.

We here in Philadelphia have much to cheer about thanks to the Eagles, who, at 4-1, lead the National Football Conference’s East Division. Defying F. Scott Fitzgerald’s assertion that there are no second acts in American lives, Lane Johnson, who last year served a 10-game suspension for supposedly violating the league’s substance abuse policy, has turned in a solid season, helping the Birds to rank fifth and ninth in total passing and rushing yardage, respectively. The 6-foot-6 offensive tackle figures to be a towering presence in the lives of many Philadelphia youths, as he launched his LJ65 clothing brand Thursday, with 65 percent of merchandise proceeds slated to benefit The Fund for the School District of Philadelphia. The branded merchandise brainchild, whose generosity will help the nation’s eighth-largest school district align itself with philanthropic partners, marks his inaugural apparel-based means to be a community presence but is not his initial way to be on the offensive against misfortunes and maladies, as he also pledges $165 to St. Jude Children’s Research Hospital each time quarterback Carson Wentz leads the club to a touchdown.

Johnson has many athletic peers who are also proving that athletes have polished hearts to match their toned muscles. His profile figures to grow, meaning area youngsters will no doubt hope followers fly to his website to purchase “trendy athletic gear.” While his place among NFL greats is blossoming, that of quarterback Drew Brees has long been cemented. The 38-year-old, whom I am convinced will play until AARP makes contact with him, used his jersey number to inspire “Nine,” an apparel line that gives, you guessed it, nine percent of proceeds to his eponymous foundation, which strives to enhance “the quality of life for cancer patients and provide care, education and opportunities for children and families in need.” Likewise altruistic, Pro Bowl long snapper Jon Weeks is making the Houston Texans organization proud through his Houston Strong shirt, a $26 top that he co-designed through Athletes Brand and whose complete profits will assist the Greater Houston Community Foundation as it helps residents recover from the devastation of Hurricane Harvey.

Attention to those performers’ on-the-field feats and off-the-gridiron gestures will continue as the NFL, which will conclude Week Five action tonight when the Minnesota Vikings visit the Chicago Bears, hits the meaty part of its schedule, but for immediate sporting drama, we have baseball. The playoffs are heating up, and while the chase for the World Series crown will inspire timeless tales, so might the efforts of such diamond occupants as Yasmani Grandal, Kyle Farmer and Alex Wood. Along with looking to secure the Los Angeles Dodgers’ first title since 1988, they are striving to generate funds for the Leukemia and Lymphoma Society and the Atlanta-based Shepherd Center, whose medical treatment, rehabilitation and research efforts help those with spinal cord and/or brain injuries, multiple schlerosis, chronic pain and other neuromuscular conditions and struggles, through shirts that Athletes Brand similarly helped craft. In what would represent a throwback to the sport’s annals, the Dodgers could end up facing the New York Yankees in the World Series, but budding Bronx Bomber Mason Williams does not have only the possibility of renewing one of the game’s best rivalries on his mind, as the outfielder is drawing attention to the Choroideremia Research Foundation Inc., which is seeking a cure to the eponymous disease that causes blindness.

America’s pastime does not have only contenders for the World Series title proving their kindness, as other diamond dwellers have teamed up with Athletes Brand to show that while athletes are displaying their superior gifts, they should never forget what unites us, namely, our needs for love and compassion. Which other athletes stand out in your mind as branded merchandise superstars? Also, who could really be a major seller if he or she produced a line designated to have a charitable element to its operations?