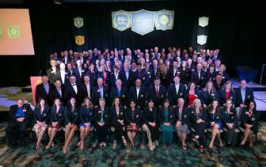 “It’s an honor to celebrate the successes of Proforma’s Million and Multi-Million Dollar Club members every year,” said Greg Muzzillo, founder of Proforma. “We are extremely proud to have the largest, most successful group of million-dollar producers in our industry. We know what it takes to build a multi-million dollar distributorship, and we have put the tools and resources in place to help our owners grow their sales as much as they want so they can live the life of their dreams.”

“We joined Proforma after many years in the industry because our sales had become stagnant, and we needed more support and resources to get to the next level,” said Mike Smith, owner of Smith Solutions Powered by Proforma and first-time Million Dollar Club member. “We wanted to grow our business, and Proforma delivered on their promise to help us get there. Now we finally have a plan for continued growth, and this trip has made me feel rejuvenated and motivated to achieve even more success this year.”

More than 70 of the industry’s leading supplier partners were also recognized during the awards ceremony for their commitment and partnership with Proforma. In addition to several receptions and poolside hospitality events, suppliers and owners engaged in a meet-and-greet breakfast to network and develop powerful, lasting relationships.

“Proforma’s Million Dollar Club celebration is unlike any other industry event,” said CJ Schmidt, president of Hit Promotional Products. “Proforma is the only organization that invites suppliers to join their top performers in celebrating success every year on these amazing trips. This is an incredible opportunity to get to know Million Dollar Club owners, meet their families and understand their businesses better, while enjoying a first-class resort and having fun together.”