We'll never forget how Michael Jordan earned his final title, as he drained a jumper with 5.2 seconds left on June 14, 1998, to give his Chicago Bulls squad its second three-peat at the expense of the Utah Jazz. Nike wants its fans and aficionados to remember that moment, too, and is calling on smart apparel to do so. Beginning May 31, the company will offer three jerseys honoring the legend, each featuring a hangtag chip unlocking clips from a 10-part documentary that details the Bulls’ dynasty.

The series-deciding dagger marked the final field goal attempt that Jordan hoisted for the team, with fans and historians aptly dubbing it “The Last Shot.” Though he knocked down many back-breaking and hope-crushing heaves for his main club, the Game 6 road launch against the Jazz deserves very bit of praise that it has received, and this anniversary tie-in stands to turn out to be an example of marketing genius, especially if big spenders go for the authentic $400 away top he donned that historic night. 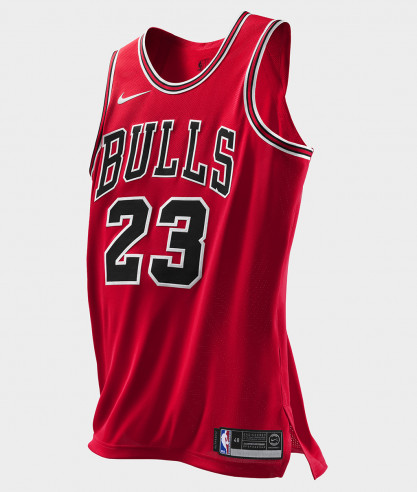 Nike will unveil three commemorative Michael Jordan jerseys on May 31, with the hangtag unlocking a sneak peek at a 10-part documentary. | Credit: Nike

The replica Swingman jerseys in white and red, at $120 each, are no slouches themselves, but no matter the size of one’s disposable income, all purchasers will be able to access “The Last Dance,” an intimate look at how Jordan and his cohorts ruled the NBA for most of the 1990s. Though the full product will not air until next year, Nike is obviously going to use the smart apparel goods to make consumers eager to go back in time and could possibly even inspire them to seek out other Jordan-centric commodities.

Speaking of motivation, the superstar will be donating proceeds from the jerseys' sales to the nonprofit Friends of the Children, a heartstrings-tugging organization if ever there were one. Nike could also prove itself a catalyst for further innovation among apparel sellers through the upcoming release. While legions of consumers are content to give their clothing a wash-and-wear existence, others are desiring more amenities and features, and businesses are responding in earnest. Much like Jordan, certainly a generational talent, they are looking for longevity, and no idea, it seems, sounds impossible to implement and obtain great results from.

Nike has long situated itself as the commercial version, if you will, of those Bulls teams of yore with respect to dominating the field, but the company and its contemporaries are always looking for competition so as to up the stakes. What, then, could you see happening to your clients' brands if you were to break away from the pack (as Jordan did when slipping away from defender Byron Russell on “The Last Shot”) and implement smart apparel offerings for their promotional campaigns?

Such technology, rapidly becoming mainstream thanks to companies like Nike and Google, could open up new ways for brands to market themselves via promotional apparel. Think embedded chips, similar to Nike's, that unlock bonus branded content on users' phones, or codes that give further discounts at a brand's online store. The possibilities for distributors and marketing partners to provide value-adds are limited only by their creativity.