Unfortunately, the science community hasn't quite mastered teleportation yet, so football fans around the country won't be able to transport themselves to Houston for the Super Bowl in the literal sense. But a promotional products company in Chicago introduced the next-best thing for the future.

Using what they call a "VPod," which is a virtual reality dome that users stand in, the company will let visitors check out the big game. It's wildly different than the virtuality masks we see people strapping to their faces. 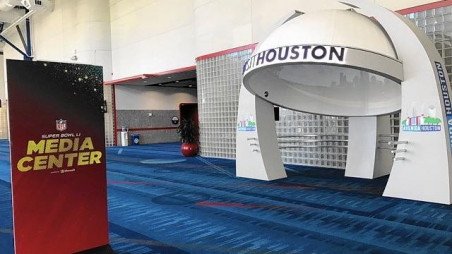 The "VPod" is a new design for virtual reality technology. (Image via Chicago Tribune)

"It's a completely different approach," Creative Promotional Products' (CPP) marketing director Jonathan Lee told the Chicago Tribune. "They said they wanted to create something no one had seen before. That was the only direction."

The company started working on it in September, after the Houston city government asked it to build a walk-in, stand-up virtual reality experience. The Chicago Tribune likened the device to "what a personal-sized IMAX theater might feel like." It's a 12-foot-diameter dome, which drops down over the users' heads to chest height. It includes two speakers for stereo sound.

"You can walk around," CPP president Dan Granick told the Chicago Tribune. "You immerse yourself into the content by standing under the dome and looking up at it."

The only problem with this design as opposed to the sensory immersion that comes with the goggles is that, because it's an open dome at the bottom, natural light and ambient noise can find its way in.

Still, this is a brand new development in the ever-growing virtual reality market, and we're interested to see new ways that companies implement virtual reality into existing technology and promotional campaigns.