It’s not every day that distributors get the chance to work with a celebrity. When they do, they want to go all out, right? Jovan Van Drielle, chief ideas artist for Geminus Inc., Scottsdale, Ariz., remembers one particular promotion that went over very well with a very famous director.

Promo Marketing: So, tell us about this promotion.

Jovan Van Drielle: Sure. Illy, the coffee company, approached me to design a compelling invitation that would blow the lid off of any invitation that Francis Ford Coppola’s celebrity friends would receive, because typically, celebrities are a little jaded. There’s so many beautiful invitations created for Hollywood parties, and you know, you really need to take it up a notch or two when you’re dealing with celebrities, because they’re picking and choosing the events they go to. So with that in mind, I came up with something. It was a musical evening, so we had these musical spoons. If you notice, they’re shaped like a musical note, and it made sense to put it into something that would be sleek, but get to the point of the event, since it was a lot of private information. You know, George Lucas' home address and Robin Williams' address—you name it, they were invited to this event. They were happy that I was able to do the calligraphy and addressing, and send everything out, one-stop shopping, basically, which I do that for a lot of my clients, because I’m able to do the calligraphy and not have to farm it out to somebody else.

I came up with that, and the client approved it, and it was a super successful event. I was actually invited to the event. [...] Because I was receiving so many kudos from my client—and in fact I did actually, as a result of that invitation—I ended up getting Francis Ford Coppola's daughter, Sophia Coppola, I did a promotion for her for her wine. So anyway, it was a nice stepping stone early in my career to do a lot more work with the wineries, which is something I love. You know, Napa Valley is one of my favorite places to go. And they're very big on promotions there, so what else can I tell you? 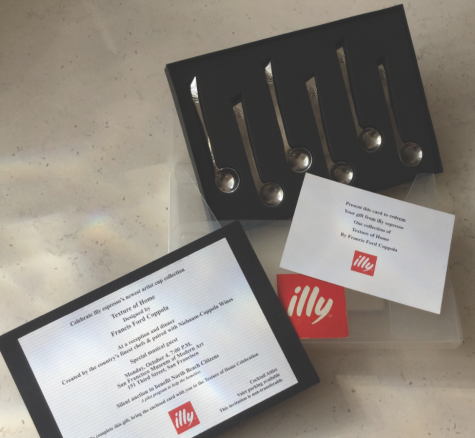 The spoon set and invitation used in the promotion.

PM: Did you run into any hurdles with this at all?

JVD: No, but I will tell you that, subsequently, Illy requested that I do an order of 50,000 spoons in plastic. They loved those spoons so much, they wanted to do them in plastic. So I went to my supplier in Connecticut, and we spent a year trying to make the mold. He had many different mold people try to make the mold. The client was very patient with me. In the end, I had to go to China to make the plastic spoons, so that was a totally different project, but it’s sad. I usually like to use U.S. manufacturing companies. I don’t like to go overseas for anything, but when it came to making that little bend in the spoon, it proved to be quite difficult for the mold-makers back east. They could not do it.

PM: Do you have any advice on doing projects like this?

JVD: Well, use trusted suppliers. I started my career in the promotions business in 1997. Prior to that, I was the marketing director for Mobil Oil Corporation. [...] And so I had already established, before I started my own company, the people that I like to work with, which were vendors. And then when I decided to go into my own business, finding out who the best manufacturers were across the country, of course going to shows, Vegas typically. And then I would always stick with those manufacturers, so that, when it comes to any project, you’re not surprised.