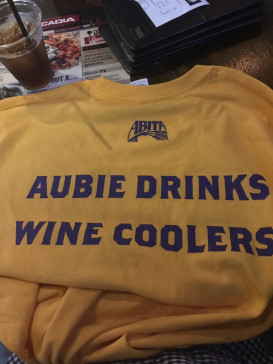 Abita Beer Company had some fun at Auburn University's expense with this T-shirt. (Image via Twitter)

Auburn University’s football program has much to boast about, as its 761 wins land it in 13th place among the sport’s most successful teams and its mascot, Aubie, an anthropomorphic tiger, has claimed nine national championships, tops among all the game’s good-luck charms. However, the school that sits immediately ahead of the Alabama-based bunch on the list of victorious institutions, Louisiana State University, could not have cared less about its foe’s win total or cheering prowess when the teams tussled on Saturday. The latter learning destination received support in its quest to down a key Southeastern Conference adversary from Abita Brewing Company, an in-state location that issued “Aubie Drinks Wine Coolers” T-shirts ahead of the clash.

The clubs, who first met in 1901 and have hit the gridiron together 51 times since, entered the tilt hoping to stay in the hunt for their conference’s West Division, which features a perennial powerhouse in the University of Alabama. For more than two decades, the overall assortment of 14 teams has been a huge factor in determining the national champion, and though LSU and Auburn, which finished atop the polls in 2003, 2007 and 2010, respectively, with the former owning two of those crowns, are solid units, neither will end up deemed the last squad standing in the BCS National Championship Game. Regardless, any battle between the teams, each dubbed the Tigers, makes fans eager to see whose claws and game plans will be sharper.

Playing on their home field, LSU rallied from a 23-14 fourth-quarter deficit to score a 27-23 win, leveling the teams’ marks at 5-2. Abita Beer Company, having distributed the garments in Baton Rouge to suggest that Aubie, if he could even imbibe booze, would make inferior choices, certainly did not influence the outcome of the contest with its gesture, but its action definitely has relevance for every brand’s quest for more exposure.

You can be sure that in committing a bit of gamesmanship at Auburn’s expense, the business not only prospered emotionally from the giveaways but also enhanced its weekend sales, especially given the aforementioned history of the rivalry. The establishment markets hats, outerwear and T-shirts on its website, so green-lighting a new garment is not particularly noteworthy, but what does deserve consideration is how it found a lucrative market, namely, college football promotions, to fetch attention.

Lowbrow humor aside, the top provides a couple solid lessons for distributors looking either to scratch their way to prominence or sustain their fortune. If possible, look to capitalize on sporting events. (Just make sure you follow licensing and trademark rules.) Sex sells, sure, but sports are no slouches, especially this time of year when MLB, the NBA, the NFL and the NHL are having their performers inspiring performers to dream of championships celebrations. Secondly, when considering a sporting event, look, if possible, to make something specific for a squad’s date with a heated and likely hated rival.

If sports do not hold your interest, you can still mimic Abita by daring to make your presence known in slightly or completely unfamiliar markets. You might end up starting slowly, but with enough patience, you could, like LSU did against Auburn, stare down your setbacks and press onward to a great comeback triumph.