The COVID-19 pandemic has affected all walks of life in the U.S. since it commenced its late-winter assault in the country. That’s led to a mindset of helping, rather than supplying, that is gaining momentum in the promotional products industry. And Guy Achtzehn is happily playing the role of one of that mindset’s biggest advocates.

Achtzehn, president of The Marketing & Sales Group Inc., York, Pa., had a plan, and he wanted to share it with others in the industry. So, on March 18, he took to the Promotional Products Professionals Facebook Group, posting about the unfolding consequences of the pandemic and noting that “we have no other choice but to create opportunities.” Achtzehn wanted to share his surprise and delight program, the center of his plan to keep promo industry businesses strong with an initiative designed to honor workers who are sacrificing so much to sustain our lives.

“We in the promo world have a great chance to help people understand how important their efforts are,” he says of doing business during this time. “Think about how much of our collective business deals with giving gratitude. That desire to thank people has to be a central theme to what we’re doing, because business-as-usual approaches have gone on hiatus.”

The Facebook post generated immediate attention, with Achtzehn instructing commenters to call him to learn more about the surprise and delight program. Developed over a period of time that saw him engage in “an exhaustive look at human nature,” it began to serve him well upon its implementation several years ago, becoming one of the largest gifting programs in the country. As one might expect from the concept’s title, the spirit behind it depends on delivering goods to unsuspecting yet worthy individuals for their professional prowess. Since the pandemic has brought ample attention to the various service industry, health care and other professionals doing everything they can to fight it, Achtzehn holds that lauding the people in those jobs must occur now and regularly.

“Look at all of the sacrifices that people are making to keep this country going,” Achtzehn says, giving kudos to truckers, grocery store workers and clerks, trash collectors, hospital staff, government workers, UPS employees and farmers. “The opportunities to thank them are insane.”

He had initially been hesitant to post in the Facebook group, because he feared that people would think he was selling a program. In reality, though, surprise and delight is all about recognizing people, and doing so “humbly, sincerely and thankfully,” he says. To accomplish that, Achtzehn, whose clients include Apple, Bulova, Fuji Cameras and Kate Spade, relies mainly on drinkware, with personalization as the pull. Coupling engraved gifts with customized notes to each recipient makes for something that will prove unforgettable, as the item and the text provide a pat on the back that resounds as an especially crucial gesture at this point in everyone’s lives.

“Don’t think that the personal touch isn’t needed, and don’t think, too, that it’s going to go unnoticed,” he says. “Not at this point in our existence, where people are putting so much on the line to protect others.” 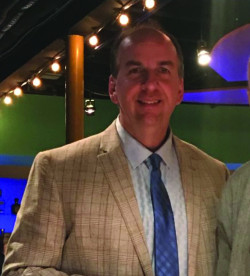 Through the surprise and delight program, selflessness abounds, and practitioners of it can gain renown as industry presences by, interestingly, remaining out of the limelight. As Achtzehn sees it, this is certainly not the time to think about just “slapping a logo on something.” Instead, it’s a golden opportunity to use promotional products as tokens of appreciation—and chances to encourage members of the aforementioned professions and other frontline occupations to continue to give their all. We’ve seen that many companies have been forced to adapt quickly during the pandemic, and that fluidity matters in the promotional products sphere, too, especially if one has the means to execute it.

“If you’re fortunate, during this crisis, to sell hand sanitizer, by all means, do so,” Achtzehn says. “If not, or if you’re able to consider something else as a way to make a difference, the surprise and delight program could be a repeatable solution for you.”

His use of “repeatable” is pretty telling, given that suppliers and distributors are always looking for that adjective to appear before “business.” In this case, though, surprise and delight is not something that anyone should intend as a cash grab, especially now when the recognition that one would be providing is something born of a national emergency. In other words, use of the program marks interested parties as those who are keen on heaping distinction on so many folks who, while helping others adjust to mammoth changes in their lives, are also dealing with severe alterations to their own sense of normalcy. Because of the significant changes we’re all encountering, Achtzehn mentioned that many people might feel reluctant to pitch anything. But that line of thinking helps neither the industry as a whole nor those who could receive a boost through gifting measures.

“If you’re at all reluctant to sell, please put those feelings behind you,” he says. “Now is the time to think differently about what you’re putting in people’s hands.”

Through surprise and delight, Achtzehn has been fortunate to welcome orders of various sizes, including a recent petition to commend 20,000 truckers for their efforts to aid the public during the pandemic. We live at a time where it can be easy to consider everyone as a whole and not to focus on the talents that each person offers to the world. Surprise and delight checks that thinking by understanding that a personalized gift can provide a life-altering addition to someone’s professional journey.

“There is a lot of power associated with giving to people,” Achtzehn says. “If we harness it correctly through personalization, there’s going to be more respect affiliated with it. That way, then, the product becomes only a part of the ‘thank you.’ The caring, comforting message and the engraving, if applicable, are what are going to carry the day.”

We are all hoping for heroes in the form of treatments and a vaccine to wipe out COVID-19. Until we have a solution, and even after that answer comes our way, we should acknowledge the helpers among us—namely, those with a selfless desire to go to work each day so that everyone else can eventually do the same again.

“These people have irreplaceable duties,” Achtzehn says. “How difficult is it, then, to give them a gift that perpetuates that realization?”