While New York City is known as one of the premier cities in the entire world for fine dining, it is perhaps even more renowned for its wide-ranging offering of street food. Though hot dogs, pretzels and halal platters are great, one food undoubtedly reigns supreme: pizza. It’s no secret that New Yorkers are passionate about their pizza—not even the city’s subway rats can resist a slice.

Pizza’s popularity was not lost on the masterminds behind this campaign for the upcoming film Good Time, starring Robert Pattinson. To get the word out about their film, set and filmed in the Big Apple, A24 distributed thousands of branded pizza boxes to shops across New York City. 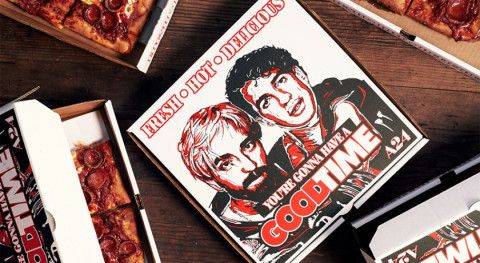 This marketing strategy works for a number of reasons. Because of the film’s connection with New York, a campaign suited specifically to the city is sure to garner interest amongst locals—and in a city of over eight million, that’s quite the target population. Though the boxes are limited in number, their visual nature will allow for an easy transition onto social media platforms, such as Twitter and Instagram. Though it’s not the case with this campaign, an even better strategy would be to tie the boxes in with a clever social media promotion, perhaps one that encourages people to post a picture of the promotional item for a chance to win something, such as tickets in the case of a film.

The campaign is also notable in that it makes itself useful—purchasers of pizza have no choice but to carry their pies home in boxes, which means that the promotion cannot go unnoticed. Not only this, but pizza is often consumed by groups of people, meaning that one box could cast a wide net.

Though it’s quite obvious that this film is suited to the pizza box campaign because of its connection to New York City, there’s a lesson here that can be applied to any promotional campaign that seeks to target a specific audience: Find a creative niche, and run with it. For example,if a campaign is promoting a TV show set in a café, hot-cup sleeves would be a great way to reach a large audience. People tend to notice even the subtlest changes to these types of everyday, ubiquitous objects, which makes them particularly suited to marketing campaigns.

Whether or not you like pizza, or even Robert Pattinson, it can’t be denied that this campaign has some valuable lessons to offer. And although I can forgive you for disliking the star of the Twilight series, I can’t say the same for any pizza pessimists out there. Seriously, who doesn’t like pizza?