With the second presidential debate occurring this coming weekend, things really are heating up in the political arena. And, between Donald Trump's "Deplorables" merchandise campaign and Hillary Clinton's controversial campaign pins, there's been no shortage of attention-grabbing, political promotional merchandise stories.

But, the question has been, which candidate does the promotional products industry support? According to a new study from NAPCO Media Research (NAPCO Media is the parent company of Promo Marketing), there's no debate. The survey polled executives across the printing, consumer electronics, nonprofit and promotional products industries to find out which candidate had the most support.

For the consumer electronics, printing and promotional products industries, those surveyed favored Trump. However, the nonprofit sector polled in support of Clinton. 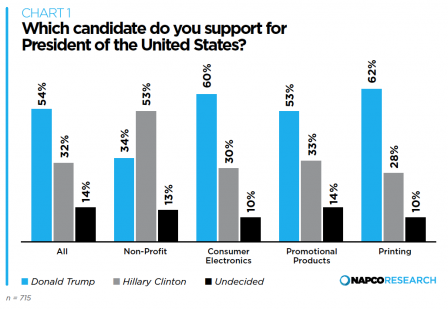 When asked the reasons for their political choices, the majority of respondents selected economic issues, with national security and immigration concerns ranking second and third, respectively.

The survey features a host of other key political findings, so be sure to check out the full version. Click here or on the image below to download a PDF. 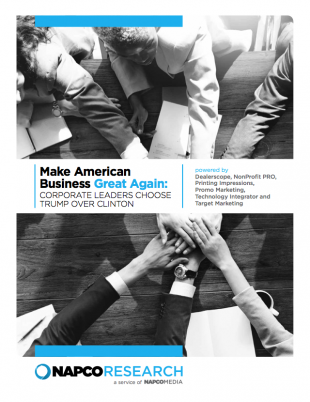