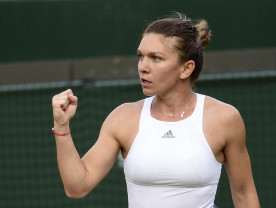 On Jan. 10, the Australian Open began without last year’s women’s singles champion and seven-time winner, Serena Williams, who gave birth in Sept. and will be sitting out until March. This wasn’t the only irregularity to occur at the tournament’s opening, however. It has come to light that the world’s number-one ranked women’s tennis singles player, Simona Halep, is playing the tournament without an apparel sponsor. If you’re unfamiliar with tennis, or with professional sports in general, just know that this is highly irregular. In fact, it’s practically unheard of.

Here’s how it happened. Adidas had sponsored Halep for four years when, in December, the sponsorship came to a scheduled end. This isn’t necessary abnormal, as that’s what contracts tend to do when they aren’t renewed. Except this particular case is bizarre, since Halep is the No. 1 ranked athlete in the world in her sport. Apparently, when it came time to negotiate a new contract, Adidas wasn’t willing to match her team’s requests for more money, grounded, as they were, in her ranking ascendancy. For one reason or another, though the details are unclear, no other apparel company managed to give Halep a sponsorship before the beginning of this season, and so she has been competing in a custom-tailored dress and a gift-shop promotional visor.

Simona Halep without a clothing sponsor wearing an #AusOpen visor...Sold out at official online store! pic.twitter.com/VLo87OsxhL

Now that she’s reached the tournament’s final, Halep is drawing plenty of attention, with some onlookers noting how unusual it is to see a professional tennis player wearing non-sponsored apparel. The situation with Adidas has not been lost on them either, as some have pointed out that the apparel giant is probably wishing they hadn’t let Halep go at the end of her contract.

Simona Halep walking into the nearest Adidas store like... pic.twitter.com/EPW6NumemO

The real star of the show, however (other than Halep of course) is the official Australian Open visor she has worn throughout the tournament. It seems that her use of the promotional visor in the tournament itself has led to some great visibility for the apparel item, which now seems to be sold out online. Not too bad for a piece of branded apparel. Hopefully, the tournament’s organizers will manage to get enough made in order to restock their stores in time for the final. If they don’t, well, there’s always a bright side. After all, they could be Adidas.

Sponsor Content American Made for 75 Years: How Bandanna Promotions by Caro-Line Became the Nation’s Only Operation With Four Imprint Methods