How a Promotional Water Bottle Is Taking Britain by Storm 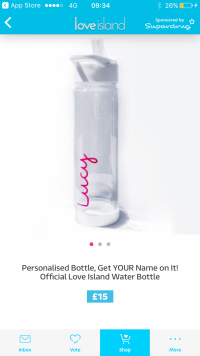 Lovers of "Love Island" can secure personalized water bottles through the Google Play Store or the Apple Store. (Image via Business Insider)

I proudly admit to being a huge fan of the United Kingdom’s cultural contributions to the global family, with music (who can truly resist The Beatles?) and literature (Shakespeare, forever!) reigning supreme. Television programs, however, have received short shrift, though parenthood has helped me to squeal for “Peppa Pig,” my science fiction sensitivity has caused me to commend “Doctor Who” and my funny bone has found itself incessantly tickled thanks to “Are You Being Served?” My relative lack of knowledge led me to wonder, “What is this?” when I learned yesterday of “Love Island,” a dating reality show that kicked off its third season June 5. While I plead ignorance regarding its appeal, supporters are barely able to contain themselves over the recent announcement that they can make like the dozen recipients by sporting a personalized water bottle.

The ITV competition has situated its latest set of sensually inclined contestants in a Majorcan villa, but the location seems secondary to what they lift to their lips when not locking them with one another. The aquatic holders immediately made me think of The Coca Cola Company’s “Share a Coke” campaign that finds the beverage corporation adoring bottles of Coca-Cola, Diet Coke, Coke Zero, Coca-Cola Life and Cherry Coke with first and last names, and while any comparison between the success of that initiative and the possible windfall from the “Love Island” decision would probably fizz out quickly, one could commend the latter move for how effectively it is using a promotional product for self-marketing. The show has generated steady ratings, even causing the overseers of “Big Brother,” usually a reliable hit, to ponder how it can retrieve enviable viewership numbers.

As for the water bottle, the United Kingdom’s The Daily Mirror tabloid selected a few Twitter users’ expressions of longing for it and relayed that they can purchase the hot item through the show’s free downloadable app on either the Google Play Store or the Apple Store. Business Insider has also explored the social media frenzy over the product, which, honestly, looks like any typical container. However, at a time when industry presences are quite willing to answer the call for individualized goods, the promotional bottle, which goes for just over $19 when one converts the price from pounds to dollars, figures to forge a love connection between it and the program’s not-so-secret admirers.

Joseph Myers is Associate Content Editor for Promo Marketing and Print+Promo. Reach him at jmyers@napco.com.