If you're not from Britain, you probably aren't familiar with 'Love Island,' the U.K.'s favorite reality dating show. It's basically the cross-the-pond version of "Bachelor in Paradise," where sexy young singles in an even sexier exotic locale compete for each other's hearts (and a substantial cash reward). Unlike "Paradise," though, the real stars of "Love Island" are the promotional water bottles. 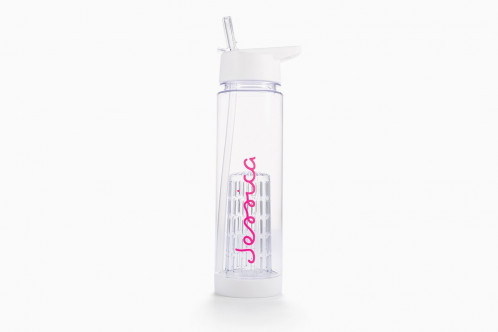 You may have heard of them before in this very publication. In 2017, the bottles took British internet by storm. In an obvious but smart marketing move, the show responded by making them available in its online store, and people went nuts. Here's how Business Insider described the phenomenon at the time:

Fans of ITV's cult reality dating show "Love Island," a show that sees 12 young, attractive singletons descend upon a luxury Majorcan villa with the goal of "coupling up," are rejoicing over news that the iconic bottles are now on sale.

People who aren't in a couple are voted off the show each week, with the end goal of being the last remaining pair on the island by winning over the hearts of the British public.

And you'll rarely catch an islander without their trusty water bottle in tow, which have become tools of seduction in their own right.

So, if we have this right, each contestant gets a personalized bottle at the start of the show. (It's important to stay hydrated on any 49-episode tropical margarita bender, you know?) The bottles apparently get a ton of airtime, with "Love Island" contestants toting them around until they're eliminated, at which point they get to take them home as keepsakes.

The bottles are back in stock ahead of the show's new season. They come in three colors, and as before, fans can personalize them with their own names, so they don't have to get one that says "Reginald" or whatever. And while it's unclear if the bottles are causing the same social media frenzy they did back in 2017, they're at least getting some news coverage and generating buzz for the show. There's even an adorable sippy-cup version for the all the little "Love Island" fans out there. So cute!

Anyway, we've still never seen "Love Island." But we kind of want to watch just to see what Business Insider meant by "tools of seduction in their own right." Who knew water bottles could be so sexy?

6 Promotional Product Ideas for the Bars and Restaurants Market