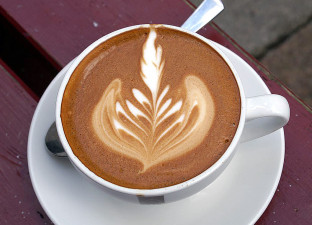 Oh so tempting and oh so potentially dangerous? The Council for Education and Research on Toxics is arguing so. (Image via Wikimedia Commons)

Coffee has long kept consumers perky, and this season has proven particularly noteworthy for aficionados thanks to the findings from two studies and a bit of business savvy from McDonald’s. As summer prepares to fall prey to autumn’s advance, though, their warm regard for the adored beverage could come to include a chilling revelation.

The Council for Education and Research on Toxics has been grinding away at the entities, including Starbucks and Whole Foods Market Inc., for seven years, but its interest in exploring a possible cancer-causing component of coffee has intensified recently because of alterations to the Safe Drinking Water and Toxic Enforcement Act of 1986, also known as Proposition 65. Full implementation of those changes will occur August 30, 2018, leading those who peddle coffee products in California to affix the aforementioned notices on the goods.

Representing the interest group, attorney Raphael Metzger has looked to debunk stances on the benefits of coffee consumption, dubbing them “just a bunch of hypotheses.” He and his client contend that the drink that millions of Americans rely on to make them feel more alive could actually be lessening their longevity. They hold that low levels of acrylamide exist in roasted coffee beans and that patrons and purchasers must know of the chemical compound’s likelihood of brewing trouble, given that California law lists it as a carcinogen.

The opposition, however, has noted that its offerings should not feature “clear and reasonable warnings” for Golden State residents because the coffee items pose no significant threats to their well-being. Starbucks used that reasoning in its unsuccessful first-phase defense, so its co-defendants are countering that an acceptable and alternative risk level exists that a lifetime of coffee-centric acrylamide exposure will not add up to.

With respect to the odorless crystalline solid, Shape.com ran an account of its presence in other products, stating it is “a substance formed in all baked, toasted, roasted and fried foods by a reaction between sugars (naturally occurring or added) and the amino acid asparagine,” adding it helps numerous cooked foods to acquire their “brown color and tasty flavor.” The ubiquity of acrylamide, therefore, will help Starbucks et al to mount their defense, and the companies could cite a declaration by the National Cancer Institute that says “additional epidemiological cohort studies are needed to help determine any effects of dietary acrylamide intake on human cancer risk,” which it stated after rodent model studies suggested that acrylamide is a potential carcinogen.

We often hear or read accounts about items that experts once deemed bad for us becoming a sudden boon and about products that supposedly could prolong our existence losing their esteemed status. Where will coffee fall, especially considering what the interest group is seeking to gain if it wins? Changes to Proposition 65 are going to be a huge concern for industry presences over the next 11 months. Do you feel the findings and conclusions will ultimately seep into discussions on coffee? Will a regular cup of Joe soon join the ranks of confirmed villains such as asbestos, cigarettes and radon, or will the greatest drawback from consuming the beverage continue to be coming down from a caffeine high?

This Subscription Box Is Designed for Seniors Isolated During the Pandemic

McDonald's Goes Minimal for 'Joyful' Packaging Redesign (But Will It Update Uniforms?)

McDonald's Is Hyping Up a New Sandwich With a Vinyl Record, a Hoodie and Its Own Merch Website