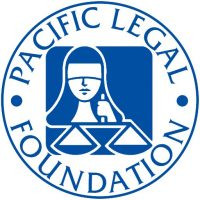 Established in 1973, the Pacific Legal Foundation sets itself to "rescuing liberty from coast to coast." (Image via Twitter)

The Pacific Legal foundation has emerged victorious the last nine times it has brought a matter before the Supreme Court of the United States. If the California-based entity wishes to reach double digits, it will need to persuade the judicial branch’s justices that they must alter apparel restrictions at Minnesota-situated voting locations.

Nobody will ever confuse a polling place with, say, a sporting event or a concert, where attendees can freely proclaim their allegiance to a team or an act. With the summer set to include as many as eight primaries/special elections, voters will find themselves reminded of destinations’ limitations, including overt attempts to persuade people to select a particular candidate of respond in a certain way to a ballot question. Minnesota practices these prohibitive measures, but, the foundation contends, it also “…threatens the free speech rights of everyone.” It does so, attorney Wen Fa, proclaims, by extending its ban on obvious campaign paraphernalia to “…any kind of apparel that reflects personal values, no matter how nonpolitical the message.”

The nonprofit, whose website states its purpose it “rescuing liberty from coast to coast,” has petitioned Chief Justice John Roberts and his peers to revisit a 2010 incident through which, so says its document, an election worker twice kept Andrew Cilek from voting because he donned a “Don’t tread on me” Tea Party T-shirt and a “Please I.D. me” button courtesy of his organization, the Minnesota Voters Alliance. Citing a hindrance to the practice of his constitutional right to free speech, the turned-away individual filed a federal lawsuit only to have it meet a lower court’s rejection, with a split decision by the 8th Circuit upholding the oppression.

“Political apparel bans like the one here would have prevented voters from wearing any one of tens of thousands of political artifacts featured in every presidential election since 1828,” the petition declares. “Today, the same bans may reach common statements such as ‘God Bless America,’ a shirt displaying the name of a religious school, or red and blue shirts, which may be construed to connote support for the Republican or Democratic Party.”

In representing Cilek, his alliance and election judge Sue Jeffers, the foundation hopes the highest court in the land will invalidate the restriction, asserting that by denying inhabitants the opportunity to dress in any preferred garments, Minnesota has “essentially created speech-free zones.”

The Supreme Court has no more oral arguments scheduled for its present term, so it is anyone’s guess how quickly it will even give serious consideration to the petition. This makes us wonder. Does your state have similar apparel restrictions with regards to voting? If so, have you thought about taking them on?