E-sports is still sort of polarizing, despite the ample proof of its success all over the world. There are still some people who might think that "professional video gaming" would never take off. Those people should see the crowds that fill arenas like Madison Square Garden to watch tournaments. They're even building arenas in major cities (Philadelphia is getting one) specifically for e-sports tournaments.

Those naysayers should also take a look at some of the big-name apparel brands getting in on the e-sports hype. Puma is the latest to join the likes of Nike, Adidas and Champion in providing apparel for e-sports teams and leagues.

Still not convinced that this is a thing? Let's look at some numbers.

CNBC, citing Morgan Stanley, said that 194 million people are expected to watch e-sports in 2019. And with 79 percent of those viewers are under 35, it's an appealing demographic for apparel marketers. 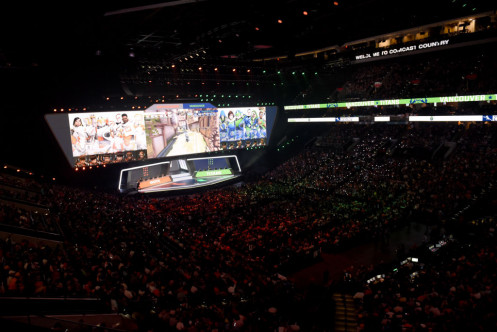 A view of The San Francisco Shock and Vancouver Titans face off at the Overwatch League Grand Finals 2019 at Wells Fargo Center on September 29, 2019 in Philadelphia, Pennsylvania. | Credit: Getty Images by Bryan Bedder

"Tapping into the world of e-sports and it's broad, dynamic consumer audience, is critical to our marketing strategy moving forward," Adam Petrick, global director of brand and marketing at Puma, told CNBC.

Just as Puma, Nike and Adidas do for professional soccer teams abroad, Puma will create game-day apparel like shirts and pants for e-sports league players as part of this deal.

"It's really going to be interesting to see if anyone can monetize [sports apparel in e-sports]," Matt Powell, a senior industry analyst for NPD Group, told CNBC. "There is an opportunity for a connection. Players want to identify themselves as players. If this is how they choose to do it, there is a monetary opportunity. Whether the e-sports player is focused on that as much as the real sports player remains to be seen."

That's the main point here: Think about how fans of sports like football and basketball buy the jerseys of their favorite players. That's so commonplace that sportswear brands like Nike don't even have to wonder if it's going to happen. But for something like e-sports, which isn't as widely televised on cable networks, or as traditional as athletics (in that the players aren't on a field or court), it's more questionable. But, if you take a walk around a city before a major e-sports tournament, you'll see that it's happening at the same rate.