McDonald's has had a ton of success with its celebrity meal/merchandise collabs featuring superstars like Travis Scott and BTS. Other fast food brands have taken notice, and as predicted are rolling out their own versions of the celebrity meals with a few twists on the McDonald's formula.

The latest to join in the fun is Popeyes, which recently announced a partnership with hip-hop artist and now Popeyes franchise owner Megan Thee Stallion to develop a new condiment, dubbed "Hottie sauce," meant to match her personality.

The first of three exclusive releases, called Thee Heat and available online, happened on Oct. 19 in the U.S. and 14 countries around the world. The merchandise in this round included bikinis, long-sleeve shirts, hats, tumblers and Popeyes chicken tenders plush dog toys. 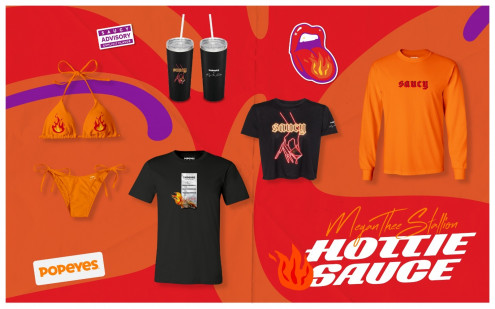 Fans of both Popeyes and Megan Thee Stallion won't just get to enjoy the sauce on their food. Popeyes Rewards members will also earn 100 bonus points when they order any eligible Megan Thee Stallion Hottie Sauce menu items on the app or online (while supplies last). The next two merchandise releases will be available throughout November.

Some good will also come from the partnership. Popeyes said in a press release that it and Megan Thee Stallion will make a six-figure donation to Houston Random Acts of Kindess, a nonprofit that promotes empathy and compassion in the Houston community.

"Popeyes one-of-a-kind partnership with Megan Thee Stallion goes well beyond the average marketing collaboration," Sami Siddiqui, president of Popeyes Americas, said in the release. "We are unifying two pop culture icons, and Megan’s innovative, creative and entrepreneurial vision is at the core of everything we’re doing."

Not to be left behind, Burger King also recently announced it’s teamed up with a few celebrities. The new Keep It Real Meals are three different selections made by three different artists from the brand’s Real menu. And even though it doesn’t appear that the company is releasing any merchandise associated with the collab, it posted on its Instagram page that the Keep it Real Meals boxes will come with a QR code that unlocks NFT game pieces.

So keep an eye out the next time you hit that drive-thru—you never know who the next big collaboration will include.

E Cassie Green Author's page Cassie Green is a Senior Content Editor at NAPCO Media, focusing on the apparel community as well as curating content across other brands. She can be reached at cgreen@napco.com.
Related Content