Racist Imagery on Sorority T-shirt Due to Clerical Error 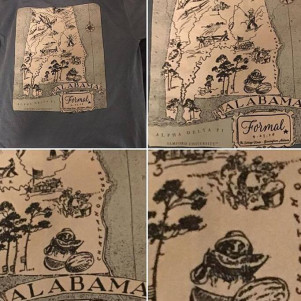 When the Alpha Delta Pi sorority from Alabama’s Samford University decided to make shirts for its spring formal, this probably isn’t the end-result it expected.

The shirts were printed with a vintage map of Alabama, which included an image of an African-American man eating a watermelon, according to AL.com.

On Friday, Andrew Westmoreland, university president, apologized and said he was personally embarrassed and “repulsed by the image” in a letter to faculty, students and staff. The university also issued an apology, noting that the university had denied the design, but the sorority had moved forward with the design anyway.

Turns out that’s not exactly what happened.

South by Sea, the apparel vendor responsible for the T-shirts, took responsibility for the mistake.

“We received notice from Samford University that this design was rejected in preproduction, and we incorrectly entered it in our system as an approval, a clerical error on our part,” a spokesperson for South by Sea said in a statement. South by Sea apologized, expressed its embarrassment, and said it plans to collect and destroy all of the shirts.

On Monday, Westmoreland sent another letter to the university’s community clarifying that, due to the error, the sorority did not know the T-shirts had been rejected. The lengthy letter detailed the chain of events that explains how the shirts were accidentally printed.

Within the explanation, Westmoreland noted that while the sorority chapter initially had proofed the design, it was a small-scale image that it didn’t scrutinize for details—like the offensive image. A university member caught the offensive design when it was sent for university approval, and marked as “rejected” on the “design approvals” page of the order. This is when a South by Sea employee mistakenly checked “approved,” instead of “rejected,” and the shirt went into production.

While South by Sea took the blame, the sorority chapter also released an apology:

We extend our sincere apologies for our mistake. In selecting the T-shirt, we failed to focus on the specific images in the design. We are horrified by our oversight. Had we recognized what the design details depicted, we would never have purchased the shirts. Upon discovering our serious error, we immediately informed our members not to wear the shirts and are in the process of collecting them all so they can be destroyed. We are committed to ensuring this never happens again.

Apologies all around, but the university has removed South by Sea from its approved vendor list.