Having celebrated its 90th birthday in January, CBS shows no signs of succumbing to decline, especially since the spring yielded its ninth-consecutive coronation as the country’s most-watched network. Never one to rest on its laurels, the New York City-situated entity increased consumers’ festive observation of the holiday season yesterday, launching 10-second spots that feature bobblehead tributes to series’ stars; game, late night and talk show hosts; and sports announcers.

Daytime and primetime dynamos are receiving their due through the figures, which, while falling 14 minutes and 50 seconds short of Andy Warhol’s promise of fame, will definitely draw viewers to the various programs and football clashes by wishing them “Happy Holidays.” That sentiment also appears on an ornament that dangles behind a CBS logo-bearing sleigh, further compelling audiences to consider the bobblehead-immortalized individuals extended members of their families as their respective celebrations approach. 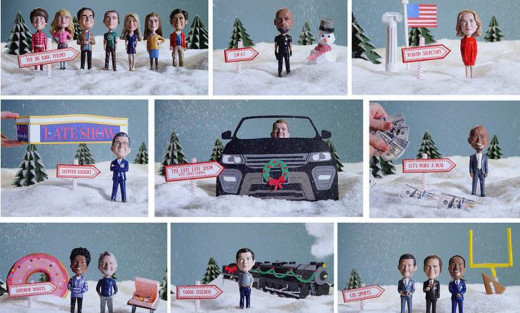 CBS is using the bobblehead promos to draw attention to its most popular network components. (Image via CBS)

With regards to that intention, end-users can expect alliterative displays of mirth from such primetime ratings rulers as “The Big Bang Theory,” “Blue Bloods,” “Bull,” “Criminal Minds” and the “NCIS” franchise. Late night hosts Stephen Colbert and James Corden will wish their late-night show devotees seasonal serenity, and soap stars from “The Bold and the Beautiful” and “The Young and the Restless” will hope their fans will enjoy a personally fulfilling plotline. Those who enjoy “The Talk,” “The Price Is Right” and “Let’s Make a Deal” are also having their spirits uplifted, and those whose loyalty lies with CBS’ coverage of the NFL are moving the chains thanks to James Brown, Jim Nantz and Tony Romo.

Accounts of the brief promos have stated that their design owes its inspiration to CBS classics “Rudolph the Red-Nosed Reindeer” and “Frosty the Snowman” and note that the marketing means will run through December, but nothing mentions the commercial availability of the goodies. Given that the same sources note that the powers that be had the bobbleheads created specifically for the promo campaign, one would hope that the products could soon be available en masse. Since CBS has obviously already catered to consumer desires by depicting the bobbleheads on screen, perhaps the network will go through the proper channels to make the collectibles stocking stuffers in the very near future.

This Distributor's 'Networking Bracelets' Are Simple, Genius Promos for In-Person Events During Pandemic

Our 5 Favorite Promotional Products of the Week: Soccer Tees, License Plates and More