Let's say you're a sports fan. An NFL fan to be exact. Your favorite team has been throwing around a sort of unofficial motto for the season and into the playoffs. It's fun. It's become a rallying cry for a season that could very well end in a championship. It's something every fan, no matter where they're located, can feel a part of. But what if you wanted to be an even bigger part of the team and its identity? What would you do? Would you trademark that phrase in the attempt to sort of extort the team into working with you?

One Las Vegas apparel maker thought that was the best course of action.

Lance Roehl, a fan of the Baltimore Ravens, has filed to trademark the phrase "Big Truss," which was originally coined by the team's running back Mark Ingram. He did it, he says, in the hopes of getting the team's attention to work with them on an official basis.

Well, he got their attention, and is now facing potential legal battles from the NFL and Ingram himself. 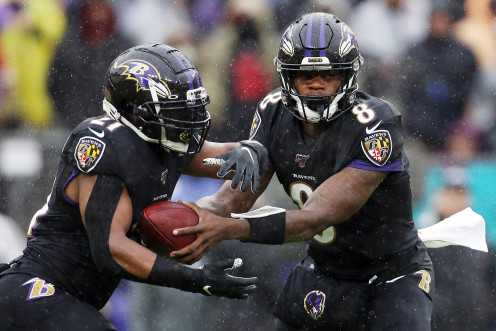 A Las Vegas apparel maker filed a trademark for 'Big Truss,' which is an unofficial motto for the Baltimore Ravens this year. He hopes it will lead to more than just legal action from the team and league. | Credit: Getty Images by Patrick Smith

According to the Baltimore Sun, Roehl applied for the trademark on Dec. 13, and is hoping his Big Truss store, which features all sorts of apparel products even with players' numbers on them, will lead to a partnership with the Ravens or the NFL agreeing to let him put the Ravens logo on his shirts.

Don't worry, it's cool though—he's donating 5 percent of all sales to the Ravens Foundation, which funds Baltimore-area organizations.

"I'm open to partnering if people would like to work together," Roehl told the Baltimore Sun. "I'm not trying to be difficult or create a problem, but there's a purpose for this [trademark]. I've applied for this, and I will do what I need to do to protect it."

Based on the response from the franchise, Roehl can probably expect to hear from some lawyers before his trademark is theoretically accepted in six-to-nine months' time.

"We are aware that people not associated with the Ravens are trying to capitalize on a saying developed by Ravens players," team spokesperson Patrick Gleason told the Sun.

"That's their viewpoint," Roehl said. "And I have mine."

Roehl has launched a few other sports-focused apparel lines in the past. In 2013, he started the "Lady Ballers" line. Like he plans to do now, he donated 5 percent of the proceeds to nonprofit Girls on the Run.

"I want to turn this into something positive," Roehl said.

It's likely going to turn into a lawsuit, though, if the Ravens' actions toward a Columbia, Maryland-based brewery are any indication. Hysteria Brewing Co. had been using Ravens quarterback Lamar Jackson's likeness and number 8 jersey for a can design, and the Ravens sent a cease-and-desist letter almost immediately.

"It's like the beer, honestly," Cynthia Blake Sanders, a copyright, media and entertainment attorney in Baltimore, told the Sun. "They're using their rights of publicity, not for the Ravens, but to endorse their own products."

The NFL is famously protective of all markers, logos and anything else it can make money on. It can't stop everyone selling T-shits and hats in the parking lot, but when something goes online and trademark become involved, a cease-and-desist notice is almost a given.

While Roehl had good intentions of working with his favorite team, he probably shouldn't get his hopes up. The NFL trademark machine is powerful.

Plus, BreakingT, who actually has a licensing agreement with the NFL, is already selling "Big Truss" gear and other merchandise with Ingram's likeness as part of a whole collection. So, while the Ravens might need that "Big Truss" trademark, they don't need Roehl's help.