Do You Recognize Anyone On Print+Promo's Under 40 List? (We Sure Do) 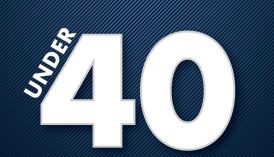 Promo Marketing's sister publication, Print+Promo, released its Under 40 list, which celebrates workers in the print and promotional industries making waves before their 40th birthdays.

Among the print and promo professionals, there are a few names that likely will stand out to distributors working in the promo side of things, like Miles Wadsworth from Logo Mats LLC, Michael Wenger from Quality Logo Products, Mariah Cassidy from American Solutions for Business, and more.

The pros featured in the article went into detail about how they've climbed the corporate ladder in just a few years. For example, Wadsworth talks about how his initial position at Logo Mats, management trainee, was attractive because it gave him an opportunity to learn and grow, but he still feels that he has ground to cover to catch up with those who have been in the industry for longer than he's been alive.

"The biggest challenge is not having the wisdom at this point that other executives may have had over a career," he said. "While I am experienced in the industry, only certain knowledge comes with time and decision-making over issues or direction of where to go next."

There's also the issue of having to establish oneself as a professional, despite the age on their birth certificate, which Cassidy described.

"My age group is on the border of Gen X and millennial, and there are negative and positive beliefs about both groups," she said. "The biggest challenge is presenting yourself as an individual thinker to prevent being defined by your age label."

The Print+Promo Under 40 focuses on professionals from around the industry who have achieved noteworthy success early on in their careers.