Thanks to a stellar 14-year stint with the Boston Red Sox, a stretch that yielded three World Series titles, David Ortiz will hold hero status in Massachusetts for the rest of his life. The owner of one of baseball’s sweetest swings ever will likely enter the Hall of Fame four years from now as a first-ballot inductee, at which time members of Red Sox Nation will flock to Cooperstown, but he will not need to wait that long to hear praise from the faithful. On Saturday, the beloved figure will receive a warm reception in a cold setting, as the Springfield Thunderbirds will laud his contributions with a sold-out celebration as part of their American Hockey League tilt against Laval Rocket. 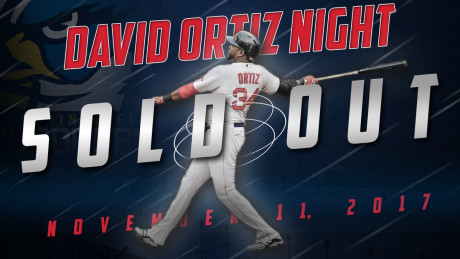 Much like he helped the Red Sox end 86 years of championship futility through 2004’s Fall Classic sweep of the St. Louis Cardinals, maybe the 41-year-old can signal a resurgence for the hosts, who hold the minor league association’s worst record. While the Thunderbirds have underwhelmed in their second season as the Florida Panthers’ preparatory affiliate, they will definitely find their fan base stoked to be among baseball royalty. Ortiz will flash his customary smile in taking photos with VIP package purchasers and in participating in the pre-game puck drop ceremony.

That is not to say his presence will suddenly make the Thunderbirds a contender, but it will help ownership move merchandise. A freebie, however, will likely stand out the most, as supporters who mimic batting practice observers by arriving early will receive an oversized card of the slugger dubbed “Big Papi.”

“We are thrilled to say we will be packing the MassMutual Center for what is sure to be one of the storybook nights in Springfield Thunderbirds history as we salute a true icon to so many people in Western Massachusetts,” team president Nathan Costa said.

Costa will also take pride in attiring his players in Red Sox-inspired jerseys, which will become auction items right after the clash. Ortiz carried many expectations during his Beantown stay, so he will certainly not feel burdened when asked to engage in literally holding something, namely the trophy from the franchise’s 2013 World Series triumph, also over the Cardinals.

Ortiz, set to turn 42 exactly a week after his hockey game appearance, retired after the 2016 season, but, as evidenced by his involvement’s ability to help peddle roughly 7,000 tickets, fans do not soon forget those who led them to the promised land and helped them remember to take pride in their city. In other words, such figures are excellent inspirational sources for promotions, and the Thunderbirds are going to ride his coattails again Feb. 17 by giving out a bobblehead featuring the star in a team jersey. As an unabashed Ortiz fan, I would love the oversized card and the figurine, but I will settle for YouTube clips of him bashing home runs against the Yankees. Thunderbirds backers, you have me eating my heart out.