The real strategy of trick-or-treating is not only bringing a vessel large enough for maximum capacity and structural integrity (pillowcase). It’s also knowing which houses in your neighborhood give away the big candy. Skip the Necco Wafers and those gross vanilla Tootsie Roll things. Focus on the house with the full sized, or better yet, king sized candy.

Hershey's is bringing that house directly to the kids this year, from a safe distance, thanks to a robotic door that wheels up to kids and dispenses king sized Reese’s Peanut Butter Cups. 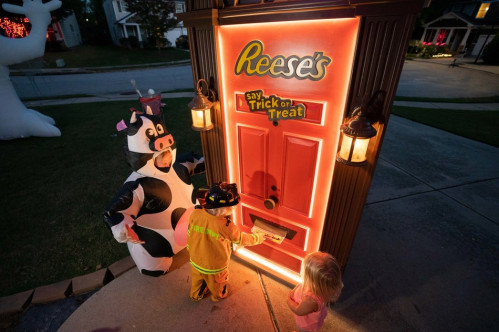 “This Halloween is unlike any other, so we’ve upped the ante on creativity as a result,” Allen Dark, senior brand manager for Reese’s, said in a press release. “A robotic Reese’s dispensing door is just what the world needs right now.”

He’s not wrong. The COVID-19 pandemic has ruined many a kids’ Halloween, as going door to door isn’t the safest thing to do right now, even if you are wearing a terrifying mask.

Reese’s is really stepping in and saving the day in a COVID-safe manner, thanks to the guy controlling the remote-controlled door from a reported 5,000 feet away. (We have to wonder if he’s in a Hershey's-branded van, too. But that might attract too much attention and create a mob of candy-hungry kids, which is exactly what they don’t want. So maybe it’s just an unmarked van or decoy cleaning service van like the heist movies.)

To get the door to come to your neighborhood, people can tell Hershey's why they should have the door in their town using the hashtag #ReesesDoor on Instagram and Twitter.

Once it arrives at your house, you just say those magic words and the door will dispense the Peanut Butter Cups.

Hershey's, specifically its Reese’s brand, has consistently thought of creative promotions in the past. And it’s even brought in automation before this robotic door.

Two years ago, New Yorkers had the opportunity to exchange their less than stellar candy (looking at you, vanilla Tootise Rolls), for “the GOAT”—Reese’s cups.

Before that, Hershey's was at South by Southwest letting people exchange promotional products they didn’t want for Hershey-branded ones instead.

So, yeah, Trick-or-Treat night looks a little different this year. Sorry, kids (and teenagers who are a little too old for it). But, “Kudos” to Reese’s (that’s a Hershey's/Mars joke) for bringing Halloween fun directly to people’s doors.

Well, technically they’re bringing the door to the people.