Reflecting on the Busy Weekend in the Trade War

It was a volatile weekend for the U.S. and China's economic relationship.

On Friday, following China's announcement that it will retaliate with tariffs on about $75 billion in U.S. goods, President Trump said that the U.S. would impose an additional 5 percent on Chinese imports.

He also took to Twitter to weigh the option of declaring a national emergency, forcing American companies to leave China, following a tweet where he "hereby ordered" them to do so.

"The problem with this approach would be political, not legal," David Dollar, a senior fellow at the Bookings Institution, an economic think tank in Washington, told NBC. "This would be hugely disruptive to American workers and firms. As the U.S. tries to isolate China, small amounts of production can shift to Vietnam, Indonesia, Mexico and other developing economies, but all of these are small compared to China. Large shifts are going to be difficult and costly."

Even if the president did decide tomorrow to turn the trade tensions into a national emergency, the legal fallout would be long-lasting, and the intended results would probably never occur. 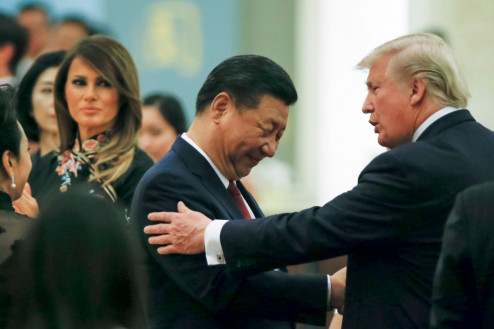 The U.S. and China have both hinted at the possibility of resolution, but it's difficult when compounding retaliation is the norm. | Credit: Getty Ima by Thomas Peter - Pool

Peter Petri, a professor of international finance at the Brandeis International Business School, told NBC that the matter "would be litigated for a long time," and could "erase the progress that the U.S. economy has made in recent years."

It's something that has affected U.S. companies from electronics manufacturers to book publishers.

"For our business it's impossible to plan," Win Cramer, CEO of JLab Audio, told CNBC. "We're making shorter and shorter decisions based on the uncertainty we're dealing with. It's misleading the public to assume that we can just build this stuff in America. The supply chain never existed for it and certainly doesn't exist today. We can't just flip that script."

Derek Stordahl, executive vice president of publishing company Holiday House, said that printing domestically is possible, but if everyone who used to work in China suddenly shifted demand to the U.S., it would cause intense gridlock.

"There are good color printers in the U.S. and Canada, but they don't have the capacity to service the entire industry and their prices are usually twice what you might pay," he told CNBC.

Holiday House responded to the tariffs by moving some four-color printing business to Malaysia, but plenty of other businesses are doing the same, which causes backup.

"We're going to miss print dates on some seasonal books that should be in the warehouse for Christmas and Hanukkah because of this chaos in the market.," Stordahl added.

An impressive majority of books, brochures, greeting cards and calendars are manufactured in China, so if all companies swiftly moved away from China to other developing countries eager for business but lacking the infrastructure, it could be extremely difficult.

On Saturday, Chinese officials said that it "strongly opposes" the Trump Administration's decision to increase tariffs, and implied further retaliation in a heated back-and-forth that raged on consistently for more than a year.

China's Communist Party's People's Daily reported on Sunday that "China is confident that it will follow its own path and do its own things well, and will never waver in its stand on countering any provocations by the U.S. side," per Reuters.

China's state news agency Xinhua issued a commentary on Saturday, too, that said the the U.S. "is paying the price for launching a trade war, as China is forced to announce the levy of new additional tariffs on U.S. goods," per CNBC.

"Through more than a year of trade friction between the two countries, China never faltered," the story continued. "When the U.S. side tried to intensify bullying and exert maximum pressure on China, it only strengthened China's resolve, making China stand more firmly against the U.S. bullying, and defend its legitimate rights and interests."

If you're on the side that wants to reach an agreement with China, rather than immediately severing all ties or continuing to flex tariff muscles and letting the economic chips fall as they may, China's state-run news agency called severing ties "ridiculous at best," and recognized that both American and Chinese companies "have been ambassadors for positive changes to the two economies."

So, at this point, China has made it abundantly clear that any tariff increase will be met with retaliation, and it does not plan to let any attempted intimidation from the U.S. dictate its economic policy.

That said, negotiating is never off the table completely.

CNBC reported that President Trump said China contacted U.S. trade officials over the weekend to discuss the issues. Chinese trade negotiator Liu He reportedly also said at a tech conference in China that officials are willing to resolve the trade dispute through "calm negotiations," and that Beijing "resolutely opposes" the escalation of conflict.

The bottom line here is this:

Things have the potential of getting choppier before they get calmer. If previous track records are any indication, the Trump Administration will retaliate before it scales anything back. China has proven that it won't take any retaliation lightly, and will continue to go blow-for-blow. But, if both sides can agree to work toward something as close to an equitable solution, there's still something positive to hold onto.