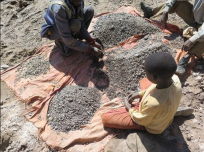 Major electronics brands, such as Apple, Samsung and Sony, reportedly are failing to do checks to ensure that they aren't sourcing cobalt mined by child workers.

A report from Amnesty International, titled "'This is what we die for': Human rights abuses in the Democratic Republic of the Congo power the global trade in cobalt," traced the sale of cobalt, which is used in lithium-ion batteries, from mines where children as young as 7 work in dangerous conditions.

"The glamorous shop displays and marketing of state-of-the-art technologies are a stark contrast to the children carrying bags of rocks, and miners in narrow unmade tunnels risking permanent lung damage," Mark Dummett, business and human rights researcher for Amnesty International, said in the report. "Millions of people enjoy the benefits of new technologies but rarely ask how they are made. It is high time the big brands took some responsibility for the mining of the raw materials that make their lucrative products."

The report traced the cobalt—which traders sell to Congo Dongfang Mining (CDM), a wholly owned subsidiary of the Chinese mineral company Zhejiang Huayou Cobalt Ltd. (ZHC)—to areas where child labor is a major problem, such as in Congo (DRC).

ZHC and CDM process the cobalt before selling it to Asia-based battery component manufacturers, which sell to battery makers that supply companies, such as Apple, Microsoft, Samsung, Sony and Volkswagen.