Report Shows U.S. Apparel Spending Up Most Since 2005 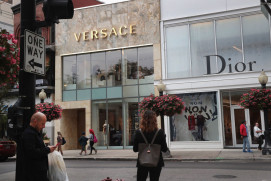 Good news for U.S. apparel sellers: Spending is up. According to Bloomberg, Americans' spending is surpassing expectations for economic growth in the third quarter, and it's apparel that is reaping the benefits.

Purchases of clothing and footwear increased at an 11.7 percent annual pace, which is the biggest improvement since 2005, according to the Commerce Department's gross domestic product figures.

Bloomberg pointed out that these initial numbers indicate that the holiday spending season might be one of the strongest seasons in quite some time. Bloomberg attributed these rising sales numbers to several factors: low unemployment, higher consumer confidence and stronger household finances. According to Deloitte, the average household is predicted to spend $1,536 this holiday season—a 25 percent increase from last year's survey.

In addition, the National Retail Federation expects retail sales to grow as much as 4.8 percent from last year, which brings total revenue (excluding cars, gasoline and restaurants) to a record $721 billion in 2018.

With consumers willing to increase spending, it could indicate that marketing budgets are also increasing this year. So for promotional apparel suppliers and distributors, it might be time to suggest some holiday promotional ideas for Q4 spending. It's also a good reminder that apparel, already promo's top-selling category, still has room to grow.