Health Canada, the country's national public health department of the government, has been receiving complaints that Banana Boat sunscreen is causing bad reactions for users aged three months to 30 years.

According to the CBC, Health Canada has received 26 complaints in the last month alone, with 14 of those complaints involving claims that the sunscreen caused burned and blistered skin. 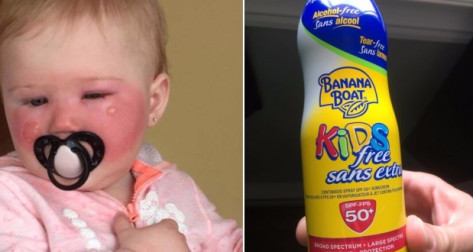 "We are looking into this situation very closely," Health Canada told the CBC in an email.

"I was horrified," Raphaelle Beaudoin, one of the parents, told CBC. "For a product that's pacifically designed for babies, it's scary."

Beaudoin said that her son had only been in the sun for a short amount of time, and wore a hat in addition to sunscreen, but appeared to develop a severe sunburn.

"His cheeks and his chin right up to his mouth were so, so red," she said. "I was worried."

The redness faded, but his skin was left feeling "really rough-feeling, almost like sandpaper."

A Calgary couple said their 3-year-old son was wearing Banana Boat Kids SPF 50 spray during a trip to Mexico in April, and saw adverse effects.

"His eyes swelled up enough that they were almost shut," the mother, Monika Truman, told CBC.

The parents assumed he was having an allergic reaction, so they took him to the hospital, where he received steroid injections and his condition improved. However, his mother applied the same sunscreen and he once again had a reaction.

"His face was all red," Truman said. "His ears were crazy red as well."

The child's father added that the child was crying during a bath because his reaction was so painful. After that, the parents concluded that it must be the sunscreen causing it.

Banana Boat, in its defense, released a statement backing up the testing that its products must undergo before they hit shelves.

"We'd like to reassure families that all Banana Boat products undergo rigorous testing to ensure safety and quality before they are placed in the market," the company said in a statement to CBC.

It also said that the sunscreen cannot cause chemical burns, and that when it first learned of the reaction to its products, it retested the batch and confirmed that it is safe for use.

The company explained that the skin reaction of burns and blisters may be a result of sensitivity to an ingredient in the sunburn that can be exacerbated by sun exposure.

However, that explanation wasn't good enough for Beaudoin.

"Pull the product," she told CBC. "Figure out what the ingredient in it is that's causing reactions. This is a child's product to keep our children safe."