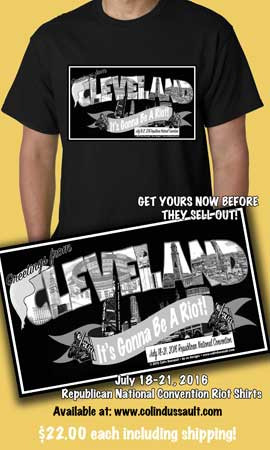 The 2016 Republican National Convention comes to downtown Cleveland July 18 to 21—and with it, the potential for controversy should GOP front-runner Donald Trump not earn the Republican nomination, if it comes to a brokered convention. (Trump has predicted riots should he not win, and Cleveland has bought riot-control gear in preparation.)

While it’s still a few months away, protesters, supporters and soothsayers alike can prepare for the convention with T-shirts that read, “Greetings from Cleveland: It’s Gonna Be A Riot!”

The shirts are the creation of Colin Dussault of Lakewood, Ohio, who has tried his hand at the local T-shirt business before with two shirts themed around the Cleveland Cavaliers. According to Dussault in The Lakewood Observer, in the few days the shirts have been available, he already has sold several hundred to customers in Ohio and other states, including Maine and Florida.

But some fear the shirt’s message promotes the violence associated with rioting and the reality of riots coming to Cleveland this summer. Fox 8 Cleveland showed the T-shirt to Cleveland residents to gauge their reactions.

“You’re foreshadowing something that may not even exist, and you’re forming an opinion in the public’s mind,” added Mike Dubin of Lakewood.

But Dussault stands by his design—referring to himself as an opportunist and capitalist, rather than Republican or Democrat—and does not encourage rioting.

Via The Lakewood Observer:

People from Cleveland have a certain indiscernible, self-effacing kind of humor and pride that only we locals can understand. Like the river burning and the Nickel Beer Night Riots, this too shall go down as a historic moment in this town. Thanks to my muse, I have the fortunate distinction of cashing in on it before and during the event as opposed to after the fact. So, hate the system. Hate the party that is changing the rules. Hate the rioters. Hate the fact that the leader is not trying to quell the riots, but don't hate me for seeing an opportunity and seizing it.

Available for $22, the shirts can be purchased online at www.colindussault.com.