In you happened to catch the Dick Clark's New Year's Rockin' Eve special on Sunday night, you might have noticed a few things: Maria Carey kept her cool (unlike last year), Steve Harvey looked like the Michelin Man, Jenny McCarthy is apparently married to Donnie Walhberg. Oh, and it was freezing cold outside.

As we watched Ryan Seacrest attempt to bring the warmth and excitement of a New York New Year's Eve through our television screens, we couldn't help noticing that temperatures looked beyond unbearable, which is why the New York Police Department made the move to allow officers to don knit hats. 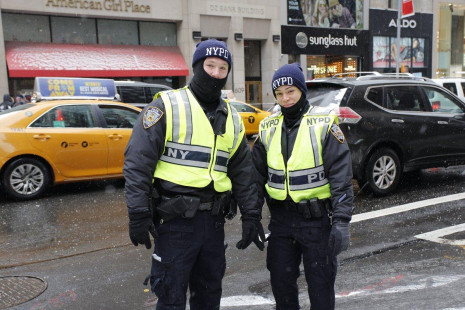 Instead of the traditional NYPD hats, officers were given the OK to sport a warmer option.

“A winter knit hat is now authorized as an optional uniform item for all uniformed members of the service,” a department memo read, according to the New York Daily News. “The approved optional winter knit hat must be navy blue in color with ‘NYPD’ embroidered on the front in white one inch block lettering."

If you saw police officers sporting these knit caps, and you were hoping to imitate the look yourself, you're out of luck for now. The official NYPD store has a few hats to choose from, but no official beanies, which seems like a missed opportunity.

We have a feeling knit caps are going to be huge this winter season thanks to the bitter cold, so it might be time your business starts pedaling the cold weather looks.