Richard Stromberg, Chairman of StrombergBrand Umbrellas, Passes Away at 78 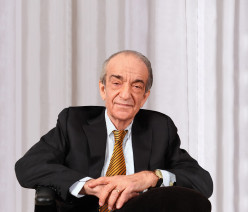 The Stromberg family has announced with great sadness that Richard Stromberg, chairman of StrombergBrand Umbrellas, passed away on March 17, 2021.

Known for his boundless positive energy and enthusiasm, even in recent years while coping with the increasing challenges presented by Multiple Sclerosis, Stromberg worked every day until his passing. Continuous development of the business and its product line was his focus, as well as directing creative projects and providing his years of wisdom to the StrombergBrand team.

Stromberg began his career at his family’s retail/wholesale umbrella business, which was founded by his father, Jaye Stromberg, in 1942. He worked his way up from what he fondly described as “chief broom pusher” to assuming ownership in 1967.  From then on, he made it his life’s work to learn more than just about anyone about umbrella production. He wanted to know every detail about stitching, fabric, frames, components and more—traveling around the world from France to Italy, the U.K., Germany, China, Taiwan and South Korea, to meet and work with top manufacturers.

After offering his products in the premium market, Stromberg entered the promotional products industry and exhibited at his first trade show in 1968 in New York City. He was interviewed on his 50th anniversary in the industry and said, “Before I signed up for that show, I didn’t even know what ‘ad specialty’ was! A neighboring exhibitor filled me in on many details of the industry. I grew to love the business and the people in it.”

He was a lifelong supporter and active participant of industry groups and associations, having served on various committees over the years, and earned his CAS designation in the 1970s.

Helen Stromberg, Stromberg’s wife, who has been with the company since 1981, continues in the position of president. Their daughter, Jennifer Stromberg, assumed the role of company vice president in 2020, ensuring a strategic third generation management transition.

“Richard has left us with a business that is thriving and with a wonderful team in place to continue operating in his legacy," Helen Stromberg said. "Those of us who knew him were constantly uplifted by his favorite sayings, which were always ones of optimism: ‘Think positive,’ ‘Where there’s life there’s hope,’ and of course, ‘carpe diem.’  We have many things to thank him for, but most importantly, his constant encouragement to push forward, work hard and believe in ourselves.”

Those who would like to reach out to the family to offer condolences or share memories of Richard are welcome to do so at this link. The family requests that, in lieu of flowers, donations may be made to the National Multiple Sclerosis Society in his memory.