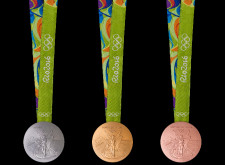 For athletes all over the world, wearing an Olympic medal is one of the highest achievements imaginable. As we get closer to this year's Summer Olympics in Rio de Janeiro, we found a look at the medals international athletes will compete for this year. Not only are they visually striking, they show a commitment to environmental sustainability.

The medals feature a design that celebrates the spirit of competition and the attachment we all have to the natural world. According to the Rio 2016 website, the gold medals are made of gold extracted without the use of mercury and in accordance with strict sustainability criteria from the mining stage all the way to the design of the final product.

Aside from the ethical material sourcing, the designers and Brazilian Mint focused on repurposing, as well as sustainability. The silver and bronze medals are made of 30 percent recycled materials. Half of the plastic in the medals' ribbons comes from recycled plastic bottles.

The front of each medal features a design inspired by laurel leaves, the wreaths worn by winners in the ancient Greek competitions. On the other side, the medals depict an image of the Greek goddess of victory, Nike, with the Panathinaiko Stadium and Acropolis visible in the background.

For the Paralympic Games medals, designers made sure to focus on how the medals can be special for visually impaired athletes. To distinguish between gold, silver and bronze medals, the designers included a tiny device inside each medal, which makes noise when the athletes shake the medal. Each medal has a distinct sound.

Victor Hugo Berbert, the manager in charge of the sound element in the medals, told the International Business Times that he wants that idea to carry on in future Olympics.

"That's what we hope, so that Paralympic athletes can have their own commemoration," he said. "To not just be able to show the medal, but for those who have a visual or sensory impairment to be able to feel it not just by touching it, not just with the Braille that is on it, but with its sound."

All products associated with the medals, including certificates and packaging, will come with an official seal from the Forest Stewardship Council, a nonprofit that focuses on responsible management of the world's forests. Marcos Pereira, superintendent for environmental and quality control at the Brazilian Mint, told the International Business Times that the Rio 2016 medals will be the most sustainable prizes ever awarded at the Olympics.

We have seen one criticism of the medals' packaging, however. The medal cases, which are made of wood and feature a sliding hinge, closely resemble a makeup compact. Refinery 29 found a few Twitter users who mistook the highly coveted Olympic medal for a new makeup product. 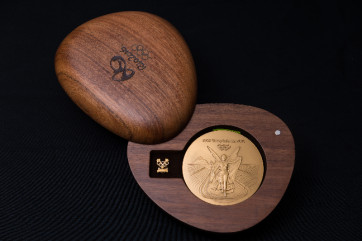 Some people mistook the medal packaging for a compact of makeup. (Image via Rio 2016)