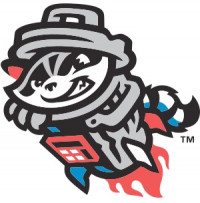 We love the Rocket City Trash Pandas. We love Minor League Baseball, and all of the hilarious and clever team names that come with it.

We’re not alone in that.

The Anaheim Angels’ Double-A affiliate is so popular that it hasn’t even played an inning of baseball yet, but has already sold $4 million in merchandise. This proves, among other things about the team, that the initial $2 million in just one year wasn't a new-team honeymoon period or fluke.

The Trash Pandas began their life as the Mobile BayBears. After being purchased in 2017, the team rebranded and relocated to Madison, Alabama, expecting to throw out the first pitch in 2020. The 2020 season was derailed due to the pandemic, but affection for the team and its mascot hasn’t wavered.

“We’ve found a few patterns to success,” Jason Klein, founding partner of branding agency Brandiose, told AL.com. “One of them is a name that cannot be ignored. There are so many team names that we call tastefully dull. People go, ‘Oh, the Bears. I know what a bear is. I don’t need to see the logo.’ And you never have a chance to chase them down … they’ve already moved on.”

There are two things that set the Rocket City Trash Pandas apart. First, “trash pandas” is a tongue-in-cheek name for raccoons, recognizing their black-and-white markings and their ingenuity when it comes to scavenging for food. Second, the team could have easily rebranded as the “Madison Trash Pandas,” but choosing “Rocket City” recalled the region’s ties to American space travel.

It piques your interest twice, and boy does it just roll off the tongue.

It also lends itself nicely to graphic design fun, with the logo being a raccoon launching itself into space in a rocket made from a trash can, complete with a calculator built into the front of the can (an homage to the region's status as an engineering hub).

“I knew, realistically, looking at other minor league team names that raccoons probably wasn’t going to get it,” said Matthew Higley, who submitted the name as part of a survey. “I had to get a little more creative.”

He was right, and a fan vote solidified the name as the team's new identity.

The mayor was hesitant, though—and understandably so. Most mayors don’t want the word “trash” associated with their city. It also could be tough to bring in sponsorship for a team called the Trash Pandas.

But, here we are, one year after the scheduled inaugural season with $4 million in merchandise sales and sold-out season tickets.

Every piece of the branding puzzle fell together, and people who aren’t even from the area, or aren’t even fans of the team's big-league club, or might not even like baseball, are buying Trash Pandas merchandise. The team’s former CEO told AL.com he remembers seeing two teenage girls go up to a merchandise store and spend about $250 on Trash Pandas gear, before exclaiming “I just like this stuff, I don’t even like hockey.”

Trash Pandas merchandise has been purchased in all 50 states as well as abroad.

“Honestly, every person that I told when I finally said I’m going to the Trash Pandas, they said that is an awesome name and I need a hat,” team vice president Lindsey Knupp told AL.com. “I need shirts.”

Krupp also recognizes that the level of creativity and out-of-pocket team identity is “the way it is in minor league baseball.” You have your Flying Squirrels, your IronPigs, your Mud Hens. Trash Pandas stands out, but it’s not the only out-there minor league team name.

“I’ve seen some quirky names, and that’s what sells T-shirts,” Trash Pandas executive vice president and GM Garrett Fahrmann said. “My initial thought was like, ‘OK, that’s what it is and that’s what we are.’”