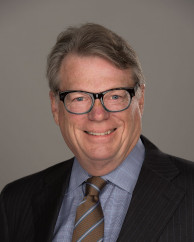 Named after the late H. Ted Olson, MAS, PPAI president emeritus, the award represents what Olson stood for—volunteerism inside and outside of the promotional products industry. The award is presented to PPAI members who have shown long-standing empathy, devotion and commitment to improving quality of life, and facilitating change for the betterment of a community. This tireless volunteer has exhibited exemplary devotion and volunteerism to nonprofit, civic, charitable and/or educational organizations committed to the needs of the communities they serve.

Brown founded MadeToOrder in 1989 with his wife, Barbara. For 11 of the past 13 years, Brown has traveled to Mexico with a team of 40 adults and 250 high school youth, where they break into 18 teams to build rudimentary housing for struggling peasant families in the border slums of Tijuana. Piedmont Community Church (PCC), in connection with Amor Ministries, screens deserving families and provides free labor to build a rudimentary house in six days. The homes are made entirely by hand without the aid of power tools, partly to teach the youth to learn skills and, more importantly, to leave the tools behind for the host families to continue making needed improvements to their homes.

Donating his time abroad, Brown reflected on his first trip to Africa where a doctor approached him, saying, “Give me a pint and I will save a life.” To sustain a community with some 11 percent of the population carrying the HIV virus, despite impressive work, local health care workers need access to blood and funding, along with social awareness. In Lesotho, where Brown has taken another group of 10 high school students, the HIV rate is 25 percent, or one-in-four people. Here, the Lesotho team built a chicken coup at an orphanage, using the construction skills they learned during earlier mission trips to Mexico. The orphans there receive the triple benefit of having fun watching the chickens, learning the responsibility of caring for them and accessibility to protein from the eggs, a macronutrient sorely lacking from their diets. Brown also raises funds, clothing and food for the Chilanga School for the Blind in Malawi.

Currently, Brown is actively organizing a fifth trip to Africa with a film crew to create a short documentary highlighting the plight of the hunted Albino orphans, who are often butchered to create “potions” of virility and long life. To learn more about the documentary and this pursuit, click here to watch the video.

“Rod has always gone above and beyond in his service to this great industry and all that he touches,” said his nominator Tom Goos, MAS, president of Image Source. “I can’t think of a better person to receive the H. Ted Olson Humanitarian Award.”

Brown’s career started in 1979 with the Oakland, Calif., office of Jack Nadel Inc. Today, key members of the MadeToOrder team own 70 percent of the company. Brown’s vision of equity for all is exemplified through the company’s Employee Stock Ownership Program (ESOP). Over the next decade, all MadeToOrder employees will be owners of the company.

While building his 35-year career in the promotional products industry, Brown served on the Promotional Marketing Association of Northern California (PMANC) Board of Directors as a director from 1993 to 1997, and as chair in 1995, and on the PPAI Board of Directors from 2011 to 2016, and as vice chair of financial services from 2013-2014. A natural bridge-builder, he has served on the PPAI Leadership Advisory Council; helped with board restructuring, legislative outreach and international advocacy; and has dedicated countless hours of service on committees, advisory groups and task forces, including the group that recommended the creation of the first PPAI Technology Conference.

He was one of the founding members of Reciprocity Road, a collaborative of service-minded distributors that provides members with the resources to build better businesses together while making their communities stronger. Since 2003, MadeToOrder has given back through its BrandGood initiative, now at the heart of the Reciprocity Road organization, whose members work to strengthen businesses and their communities through donations and fundraising for charities like the Half the Sky Foundation, the Carbon Fund, Promotional Products Education Foundation’s (PPEF) Tomorrow and Century Funds, Children’s Miracle Network, Cancer League, and many more.

Brown is equally dedicated to serving the greater community, both at home and abroad. He served two terms on the Board of Directors of the Piedmont Council for the Boy Scouts of America from 2009-2015, and over 10 years he helped gross more than $1 million, netting close to 50 percent in program support for 2,000 girls and boys. Brown is also engaged with PCC and has served two terms on its Board of Trustees. He says, “One of the hardest things in the world is negotiating the salaries of good friends whom you are asking to help save your soul.”