We've been wracking our brains trying to think of the perfect Bowie/space reference to lead in here, but the options are almost too plentiful, so we're just going to give it to you straight:

A set of David Bowie commemorative stamps made their way to stratosphere via helium balloon as a memorial of his death last year.

According to The Guardian, 52 sets of stamps were attached to helium balloons (an homage to Bowie's role in "The Man Who Fell to Earth") to commemorate the late artist's 52-year career. 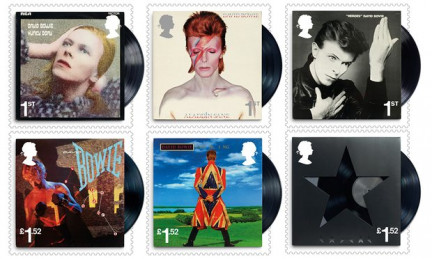 Ten David Bowie-themed stamps made their way to the edges of the atmosphere to commemorate the artist's career and death. (Image via The Guardian)

The stamps all had a special handstamp of the lightning bolt from the cover of Bowie's "Aladdin Sane" record. Fans who correctly guess where the stamps landed can win one of the limited album covers.

Too bad the stamps never made it far enough to answer the question: Is there life on mars?

There's one. Let's try another:

The stamps must have been floating in a most peculiar way on their way down.

A couple more for good measure? Why not?

There's a star stamp waiting in the sky.