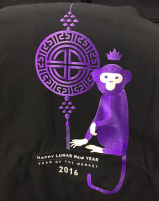 The NBA's Sacramento Kings planned to give away a Lunar New Year-themed T-shirt during its game against the Milwaukee Bucks on Monday night. However, members of the Kings organization, including team center DeMarcus Cousins, found the T-shirt to be racially insensitive for the first day of Black History Month, and the team subsequently pulled the giveaway.

The black shirts featured a purple monkey representing the Chinese Year of the Monkey, which begins Feb. 8 on the Chinese calendar. While there is a league-wide initiative to celebrate the Chinese New Year, according to ESPN, the Kings' staff agreed the T-shirts were racially insensitive in the light of Black History Month.

"We all need a lesson in sensitivity. In an effort to celebrate Chinese New Year, we had some concerns about the T-shirt giveaway, so we pulled them all before the doors opened. Certainly we don't want to offend anybody, and we acted as soon as we heard the concern."

While the T-shirts weren't distributed, the rest of the Chinese New Year celebrations continued.