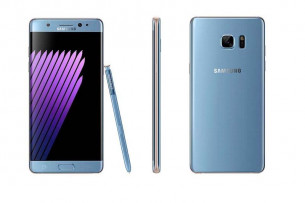 Samsung is bringing back its Galaxy Note 7 in some capacity, it said. (Image via Twitter)

While techies are looking forward to the Samsung Galaxy S8, Samsung just announced that it will still use its Galaxy Note 7 (the subject of a major recall and controversy) as much as possible.

Samsung is taking steps to use as much of its Galaxy Note 7 intellectual property as possible. This includes saving parts (like cameras and semiconductors), extracting metal parts and selling refurbished devices whenever it can, The Verge reported.

This is contrary to what Samsung said it would do with the device in the fall. The South Korean tech giant told The Verge that it will work with local authorities and carriers to sell it as a refurbished device (with a smaller battery, possibly, to avoid the original problem), and will sell it to available markets if local regulators approve.

"The objective of introducing refurbished devices is solely to reduce and minimize any environmental impact," Samsung told The Verge. "The product details including the name, technical specification and price range will be announced when the device is available. Samsung will not be offering refurbished Galaxy Note 7 devices for rent or sale in the U.S."

That last part leads us to think of two things: First, while people can't buy the refurbished products here, U.S. consumers could still buy the phones on the internet on third party sites. Second, if Samsung releases a product with Galaxy Note 7 components, it may not be branded as the "Galaxy Note 7," instead hitting the market as something different.

This whole plan came about after Greenpeace protestors showed up at the company's Mobile World Congress keynote address in February. Greenpeace members demanded that Samsung disclose what it planned to do with the 4.3 million recalled devices.

"Greenpeace will make sure Samsung takes into account the voice of millions of our supporters and abides by its commitment," Greenpeace said in a blog post.

Aside from this development in smartphone technology after a debilitating setback related to lithium-ion batteries, this news might mean old Galaxy Note 7 accessories are still in demand, or at least viable, again. That could impact the way promotinoal products distributors plan future tech promotions.