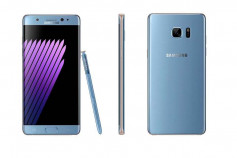 Samsung has discontinued its Galaxy Note 7 phone due to battery issues, and the problem still isn't completely solved. (Image via Twitter)

After the messy situation surrounding the Samsung Galaxy Note 7 (which we still get notifications about when we're boarding airplanes), Samsung announced yesterday that its latest smartphone, the Galaxy S8, could be delayed as it ensures that it has solved the battery problems from before.

Following the company's probe into the cause of fires in its Note 7 devices, the South Korean tech giant claimed that faulty batteries from two suppliers were the cause of the product's problems—a $5.3 billion problem, to be exact.

"The lessons of this incident are deeply reflected in our culture and process," Samsung Mobile chief Koh Dong-jin told Reuters. "Samsung Electronics will be working hard to regain consumer trust."

While Samsung ordinarily displays its new Galaxy S series devices at the Mobile World Congress show in Barcelona at the end of February, the company will sit this year's conference out. Analysts believe the phone will hit the market by April of this year.

Samsung also said yesterday that it hasn't decided whether or not it will reuse parts recovered from Note 7 devices or resell any recalled phones, but a source close to the company said that refurbished Note 7 devices are possible. So far, Samsung has recovered 96 percent of the more than 3 million Note 7 devices sold to customers.

Sponsor Content The Power of Utility: The Most Effective and Valuable Promo Products are the Most Useful
Comments
The Top Lists