One of the best things about the internet is that it gives anybody, anywhere in the world, the ability to create something without having to deal with traditional gatekeepers.

Conversely, one of the worst things about the internet is that it gives anybody, anywhere in the world, the ability to create something without having to deal with traditional gatekeepers.

As an example of that negative side, scammers in Bangladesh created almost 2,000 fake Women's March pages on Facebook as part of a targeted effort to sell T-shirts.

One user first noticed something wasn't right when someone kept posting what she called "weird, partisan memes that seemed totally out of character" for the page. She also noticed the page had the wrong date, and no one in her community of North Carolina activists knew who ran the page.

Aside from the North Carolina pages, there were similar pages posted for events in Maine, Vermont and more, according to CNN, advertising marches in cities and listing incorrect dates. 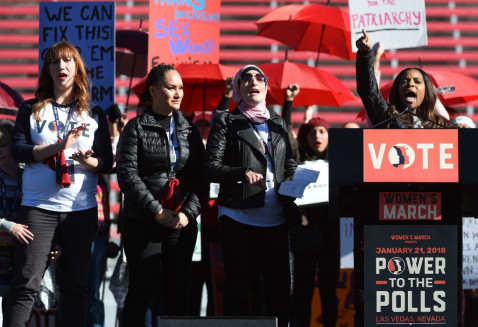 A team of scammers in Bangladesh used U.S. enthusiasm over the Women's March to sell bogus merchandise. | Credit: Getty Images by Ethan Miller

A CNN investigation found that a team of scammers in Bangladesh used the pages to "exploit Americans' interest in politics and protest in order to sell T-shirts." CNN found a total of 1,700 separate Facebook pages created to trick users into buying merchandise.

Many of the pages posted links to unofficial Women's March gear on platforms like Viralstyle and Teespring, where users can design and sell their own designs and have the company do the printing for them. There are apparently existing groups in Bangladesh for people to discuss how to maximize profits through selling merchandise on Viralstyle, such as targeted Facebook ads and YouTube videos.

"When there is enough interest in our platform from a specific area of the world, we will usually create a specific group for that country or area," a spokesperson for Viralstyle said. "The main purpose of these groups is to provide support, training and brand awareness."

However, the source told CNN that it identified users associated with the campaign, and ended all campaigns from the users immediately.

"Teespring does not directly employ any creators or sellers," a spokesperson told CNN. "Bangladeshi users are self-employed, like the rest of Teespring's community. They use the platform and are not employed by the company."

The trouble, for Teespring anyway, is that the merchandise used copyrighted official imagery. That's long been an issue for the site.

"What is particularly notable about the relative sophistication of dozens of fabricated Women's March Facebook pages is the co-opting of official images and logos, hashtag hijacking, using preexisting hashtags such as #womenswave to attract attention to the pages, as well as the localized targeting of urban, suburban and rural communities across the country," Benjamin T. Decker, a research fellow at Harvard's Kennedy School of Government, told CNN.

"People need to be able to trust the connections they make on Facebook," Facebook spokesman Andy Stone told CNN. "That's why we have removed pages and events associated with fake women's marches. These pages and events appear to have been created in order to profit from people interested in the event by selling march-related merchandise. We continue to investigate, remove additional associated fake events and pages, and take action against those involved in creating them."

"The efforts to capitalize on movement work isn't new, but it is frustrating, particularly as we make an effort to only sell ethically sourced and produced merchandise," a Women's March spokesperson told CNN. "A rule these imposter pages don't abide by."