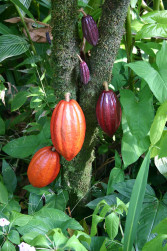 Cacao plants are highly susceptible to disease, which can spread quickly.

Experts are fearing a global chocolate shortage, as not only do cacao farmers have to worry about diseased crops, such as the rampant "frosty pod rot" spreading throughout cacao-producing countries, but also the increasing demand for chocolate from countries like China and India.

Because most cultivators only grow a few varieties of the cacao plant, it is especially vulnerable to disease or defects, due to similar or identical genetic traits.

Because of the narrow gene pool, the common varieties of cacao are susceptible to fast-spreading diseases, like Monilophthora roreri, called "frosty pod rot" for short. During the 1970s, Costa Rica's cacao industry was thriving, but after the spread of the disease into the '80s, exports of dry cacao beans had declined by 96 percent.

The problem isn't just in places like Costa Rica, however. Due to the global trade, the spread is easy. In fact, it doesn't even have to be global trade of cacao beans themselves to set it off. In September of last year, Jamaica experienced an outbreak of frosty pod rot that some experts chalked up to marijuana traffickers coming from Costa Rica to Jamaica, unknowingly bringing infected cacao pods as snacks for the trip.

"For me, the cacao industry is in permanent risk, because intentionally or unintentionally this disease could be spread in just one flight," Dr. Wilbert Phillips-Mora, head of the Cacao Genetic Improvement Program at the Tropical Agricultural Research and Higher Education Center, told The New York Times.

The outbreak in Jamaica was the first of its kind outside of Latin America, and, according to Dr. Phillips-Mora, shows the disease's ability to spread long distances. He added that countries in West Africa, from which many major companies like Hershey and Mars source their cacao, could very well be at risk, too.

Citing the relatively small amount of cacao that is cultivated, paired with the increasing global taste for chocolate, experts like Dr. Phillips-Mora say that a "global chocolate shortage" may be possible in the near future.

But, scientists like him are working on ways to keep the cacao industry afloat and avoid the spread of disease. During the 1980s, Dr. Phillips-Mora worked on growing a naturally tolerant and productive cacao tree through the process of hybridizing plants. After decades of work, he yielded his first positive batch in 2006.

"Our goal is not just to produce cacao," he said. "It's also to give the basic living conditions to the farmers. Most cacao farmers are very poor, because the system is based on material that doesn't have good yielding capacity."

His hybrid plants are currently growing in Central and South American countries like Mexico and Brazil. The goal is to increase the number of cacao genes in the world to satisfy global taste as well as demand.

If that goes as planned, the chocolate industry (and all of us with a sweet tooth) can continue to thrive.

Now Travis Scott Has a Co-Branded Seltzer with Anheuser-Busch

Our 5 Favorite Promotional Products of the Week: Baseball Bat Mugs and More
Comments
The Top Lists