Reducing waste and pollution is a priority for the science and business communities alike. You know how the mantra goes: Reduce, reuse, recycle. Saving paper, especially, is a primary concern for many businesses. Businesses can reduce paper use by going online. They can recycle when they can. Now, scientists may have just found a way to save paper in a new way—reusing it.

A group of researchers at the University of California, Riverside, in collaboration with Wenshou Wang at Shandong University in China, created a new coating for regular paper. The coating doesn't need ink, it can be printed on with light, and it can be erased and reused more than 80 times, according to a paper published by Smithsonian Magazine.

The writer, Yadong Yin, a member of the UC Riverside team, explained how it worked:

The coating combines the functions of two types of nano particles, particles 100,000 times thinner than a piece of paper. One particle is able to get energy from light and initiates color change of the other. This represents an important step toward the development of reprintable paper.

The paper starts blue, and the user puts a sheet with printed letters and patterns in black. UV light then passes through the blank areas onto the blank sheet. Think how ink goes through a silkscreen onto items like T-shirts. 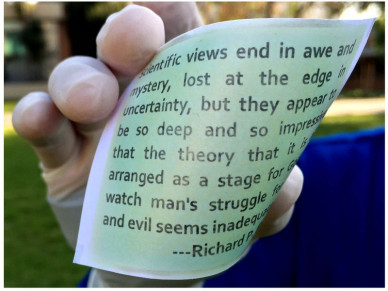 This paper can be erased and reused up to 80 times. (Image via Smithsonian Magazine)

To erase, all you need to do is heat the paper to about 250 degrees Fahrenheit. This speeds up an oxidation reaction, which erases the printed image completely in about 10 minutes. Since paper ignites at about 451 degrees Fahrenheit (thanks for helping me remember, Ray Bradbury), there's no fire hazard. Yin added that this is also lower than the temperature of current laser printers (392 Fahrenheit) to fuse toner onto paper.

This new development has huge environmental effects, too.

Even after paper is made, its use damages the environment. Trucking paper from where it's made to where it's used generates air pollution. And making and using ink and toner also harm the environment by contaminating water, poisoning soil and destroying the natural habitats of wildlife. Our method uses nontoxic ingredients and permits repeated reuse of paper, thereby reducing the environmental effects.

While the paper they use starts as blue, blue isn't the only option. The Prussian blue molecules they use "can be easily modified to produce different colors."

We can change the pigment's chemical structure, replacing some of its iron with copper to make a green pigment, or entirely replacing the iron with cobalt to make brown. At present, we're able to print in only one color at a time.

"It's probably not feasible to hope for a completely paperless society," Yin wrote. "But we are working on helping people use far less paper than they do—and more easily reusing it when they're ready."