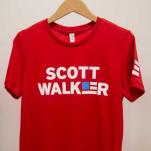 In exchange for helping him pay off campaign debt, Scott Walker will give supporters a random campaign T-shirt. (Image via Twitter)

Wisconsin Gov. Scott Walker's presidential campaign is over, but the former candidate still is looking to supporters to help raise funds. In exchange for a donation of at least $45, the supporter will receive a T-shirt, with only one caveat—it may not fit, and the campaign will pick which color to send.

According to Talking Points Memo, Walker is working to pay off $1.2 million in outstanding debt from his failed presidential campaign, so he sent out an email to supporters, asking for donations in exchange for a 2016 campaign shirt. For a $45 donation, you'd think that supporters could at least choose what they got, but it seems that Walker is more concerned with simply clearing house.

"It was brought to my attention that we have a hodgepodge of campaign T-shirts leftover," the email said, according to Talking Points Memo. "They are collecting dust somewhere, and we lack the staff to organize them. I cannot stand to see them go to waste, so we will give any supporter who contributes $45 or more to retire our campaign debt a T-shirt as a token of our thanks."

He likened the situation to his parenting experience with his two sons.

"When Matt and Alex were little and fighting over what color cup or toy they wanted, Tonette and I used to tell them, 'You get what you get and you don't get upset,' and I guess that applies here too," he said in the email, according to Talking Points Memo. "Tonette tells me there are crafty things you can do with T-shirts, like framing them or turning them into a pillow or bag."

Walker said in the email that recipients, should they receive an ill-fitting shirt, can keep the item as "a souvenir of our conservative campaign."

To reach his goal of settling his campaign debt by the end of the year, Walker also has rented his email list to other candidates, such as Ohio Gov. John Kasich and Texas Sen. Ted Cruz.

"Our goal was to have it wiped out by the end of the year, which puts us in a good position, if I choose to make it official to run for re-election in 2018, to not have to worry about that, to be focused on the state campaign," Walker said to The Capital Times.

He was unsure exactly how many T-shirts he has remaining, though, but told The Capital Times they are stored in a safe location.

"I don't have them in my basement, or anything like that," he said.