Note: This story was originally published in the February 2020 issue of Promo Marketing magazine and has been updated.

With warmer weather arriving and most people stuck indoors, a number of consumers will turn their attention to spirited rounds of spring cleaning. As they sort through items to give away or toss, we can presume that promotional T-shirts will not be leaving too many closets and drawers for good, as they have stitched together an instrumental role in lifting apparel to the summit of the promotional products world.

The wearables category finds itself in an interesting period. Most apparel suppliers with the technical capability to do so have added face masks and other personal protective equipment to their offerings. And while those items might be seeing the bulk of interest and orders right now, other branded apparel still has a role to play. That's especially true of T-shirts, which have played a critical role in keeping smaller businesses afloat.

That, combined with T-shirts’ general popularity, means selling T-shirts is still an option right now, and will be in the long term. Promo Marketing connected with George Kilian, founder and president of Sharprint, Chicago; Lindsey Williams, marketing coordinator for SnugZ USA, West Jordan, Utah; Amanda Mitzman, marketing director for Next Level Apparel, Gardena, Calif.; and Glen Brumer, sales director for Royal Apparel, Hauppauge, N.Y., to gather a deeper understanding of how promo distributors can sell more T-shirts, and what buyers and end-users are looking for in their tees.

“Because T-shirts are an exceptional way to let people paint their own message and are also a great study in longevity and individuality, we could go so far as to say that the T-shirt is the American uniform,” Brumer said. “Consumers keep giving that opinion more credibility because they’re seeing their attire as extensions of themselves and valuing T-shirts as a great means to make that connection.”

Royal Apparel prides itself on its USA-made creations, and Brumer noted that end-users react favorably to the goods. Along with that appreciation for American craftsmanship, he said that wearers want companies to adopt an eco-friendly mindset when it comes to production. That push for sustainable practices resounds as a double bonus, because not only does the implementation of such methods prove beneficial to the environment, it also leads to extended lifetimes for the T-shirts, which is what buyers have long wanted anyway.

“Sustainability has become a key selling point for us, too,” Mitzman said of Next Level Apparel. “We really value the experiences that people are having when wearing T-shirts, too, so we’re keen on capturing the inclusivity of the product.”

Also enamored with respecting what Mitzman dubbed “the spirit of the original T-shirt,” Next Level Apparel has been especially astute as a supplier since 2018, when it commenced a creative revamp after its recapitalization by Blue Point Capital Partners LLC (see our story on page 16 for more on private equity in promo). That connection has given Mitzman and her colleagues additional resources, and with that has come extra admiration for T-shirts’ possibilities.

“T-shirts are a playground for coming up with, and then giving life to, great ideas,” Mitzman said. “There’s a blank garment, and then the magic, so to speak, happens. That’s among the things that I find most compelling about T-shirts—the collaborative environment that goes into their creation is very educational.”

Sharprint’s staff likewise enjoys experiencing teachable moments, and Kilian gladly admitted that he has become one of the most eager students. His enthusiasm and Sharprint’s focus on innovative research and development have given the company a chance to work with some of the largest apparel companies in the U.S.

“What I have realized over the years is that buying and owning a T-shirt is an emotional thing,” Kilian said of helming a decorating business that produces more than 8 million annual impressions. “Whether people are buying a shirt from a store or ordering shirts for an event, the process is usually very personal.” 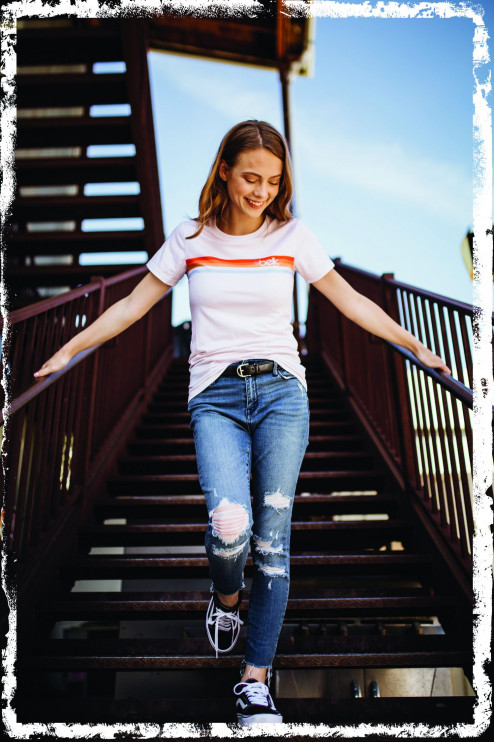 Since T-shirts have long been a promo go-to, one might wonder what has caused them to recently gain in popularity. As Brumer, whose business has tripled in the last five years, and Williams, whose employer recently became a producer of dye-sublimated apparel, see it, the reasons include relaxed dress codes in offices, an enhanced respect for design possibilities, utility, and stronger relationships among manufacturers, distributors and suppliers.

“We should be seeing everything through a consumer’s eyes,” Brumer said of adopting a model that gives T-shirts renown as a “slow fashion” mainstay. “Once that happens, it’s easier to cater to needs and not to end up with a bunch of products that go nowhere.”

For the folks at Royal Apparel, that means, according to Brumer, monitoring women’s fashion more closely, as he stated that women are preferring looser fits and oversized T-shirts, and being serious about researching reactions to certain products and attractions to particular materials. SnugZ USA has adopted this same kind of attention to detail as it ventures further into the apparel world.

“We found a niche with printing full-color dye-sublimated items, and we are good at it,” Williams said. “We have been producing dye-sublimated apparel for less than a year, but it shows mass potential. Full color is the wave of the future, with fun and creative designs. ... Some popular design trends that we have seen are drawing inspiration from nature, graffiti and street art, references to vintage art eras, hand lettering and unique uses of typography.”

Kilian and Mitzman hold similar views on what has led T-shirts to keep growing as a promo category, with Kilian particularly excited to plan his next step.

“We feel it’s our job to show all the different techniques and ideas that are possible for a tee,” he said, noting that the “explosion” of various cuts and fabrics has been an industry game-changer. “We have been showing specialty techniques for years and find people are moving toward spending a little more to get something a little different that people want to wear.”

“Everything is becoming more specific and targeted because people are open about what they want to put on,” Mitzman said, adding that those looking for similar knowledge should continue to push the fashion envelope themselves. “I see the T-shirt section of the apparel industry as a big chance to be creative and purposeful in putting out something that’s highly marketable.”

As for how to reap the benefits of the ongoing T-shirt revolution, our industry experts advocated for being as tireless as innovators as audiences are at being trendsetters.

“Don’t be afraid to try new things,” Williams said. “This can be anything from a new logo design or background to a new color scheme. Take risks, be creative and be different. Everyone has a go-to type [T-shirt]. This is your chance to express personality.”

“Keep your finger on the pulse,” Brumer added. “If you’re out shopping, look around. If you’re online, do the same thing. If you’re seeing people on the streets, take note of the pride that they take in wearing T-shirts. That education is key so that you can then give that same wisdom to your clients.”