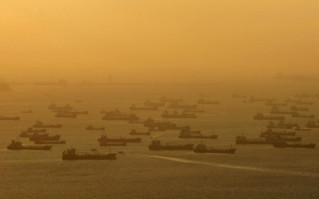 Shipping vessels and oil tankers line up on the eastern coast of Singapore July 22, 2015. (Image via REUTERS/Edgar Su/File Photo)

The global shipping economy faces the threat of paying a levy to the European Union (EU) on its greenhouse gas emissions, as officials are increasingly disappointed in the lack of progress being made by the industry to tackle the issue.

The shipping industry has rejected unilateral moves by the EU, claiming that it would distort world trade, Reuters reported. Instead, the industry is pushing for the International Maritime Organization (IMO) to handle it.

Last week, EU lawmakers voted in favor of including the shipping industry in draft reforms of its carbon emissions trading system (ETS). If it goes through, it could mean that he EU sets up a fund to compensate for the industry's carbon footprint.

"[The ETS's] unilateral application to global shipping would create market distortion while generating trade disputes with China and other Asian nations," said Simon Bennett from the International Chamber of Shipping. "We hope that EU governments and the European Commission will see sense."

Allard Castelein, CEO of the port of Rotterdam, an important hub in Europe, said the IMO plans didn't do enough to curb emissions, and that it was "far too late."

IMO secretary-general Kitack Lim responded by acknowledging the urgency of the matter, but stressing that it would find a solution to limit greenhouse gas emissinos "by working together and not leaving anyone behind."