After an especially troubled week of the Trump presidency’s waning days, Shopify has shut down two online stores tied to President Trump, including the official shop.donaldjtrump.com campaign store and the official Trump Organization store.

A Shopify representative told the New York Times that the sites “violated a policy that prohibits the support of organizations or people ‘that threaten or condone violent to further a cause,’” referencing the violent mob that broke into the Capitol building on Wednesday after the president delivered a speech.

Attempting to access either the Trump Campaign store or the Trump Organization store now results in the following error: 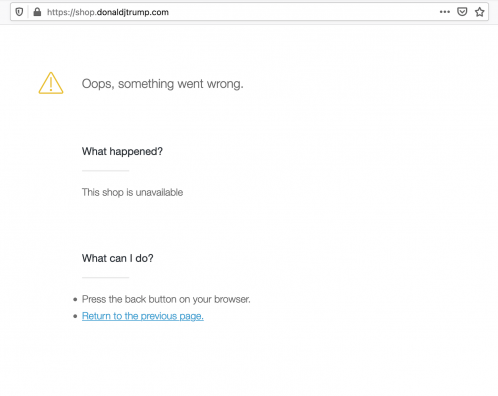 Shopify has not banned any other Trump-related online stores on its platform. Shops such as OfficialTrump2020store.com and Trump-Hats.com, among others, are still available. Shopify might eventually get to those sites, but for now it has shut down only the ones directly operated by the President or his campaign.

“Based on recent events, we have determined that the actions by President Donald J. Trump violate our Acceptable Use Policy, which prohibits promotion or support of organizations, platforms or people that threaten or condone violence to further a cause,” the company told the Times. “As a result, we have terminated stores affiliated with President Trump.”

It will be interesting to see how Trump and his team, going forward, handle merchandise. He’s leaned heavily on his own branding from the 2016 campaign and onward. And every indication points to continuing his MAGA branding in some capacity after his time in the White House ends on Jan. 20. But, given the events of this week, it could be slightly more difficult for him to push his branding than it had been before last November, or even last week.