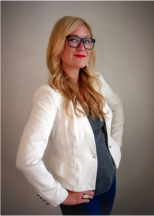 “Jill has excelled in her role as director of global sales, and this transition will allow her more time to focus on prospecting and building significant new relationships,” said Michael Emoff, chairman of Boost Technologies LLC.

Prior to joining Shumsky, Albers was a marketing/advertising director at a supplier in the promotional products industry. She has an extensive understanding of the industry, specifically in sourcing, developing and implementing innovative promotional campaigns for her customers.

She joined Shumsky’s new Business development team in 2010, and quickly became a team leader. Through vast networking, Albers developed working relationships with some of the world’s top companies and, together with the internal creative team, developed award-winning campaigns. In 2013, she invented her first promotional product: a convertible running vest/tote bag.

Albers is well-known and easily recognized in the promotional world by her quirky glasses, nickname ("Jilly"), long hair and 6' height. She serves on a number of industry boards, earned a spot in PeerNet’s Million Dollar Club for the past four years and achieved the highest sales over quota at 365 percent. She has been named sales representative of the year, won Pyramid Awards for creative campaigns and served on industry panels.