Is 'Sideline Swag' the Future of Football Promotions?

College football players typically adorn the backs of their helmets with stickers as signifiers of especially good games. Usually, the stickers are miniature versions of the school's logo, or maybe a symbol relating to the mascot or the team. When players can cover their helmets, they serve as badges of honor during game time. But, don't you think some players might want something a little more, let's say, flashy, than a sticker?

That's what the University of Miami thought, at least.

The Hurricanes football program contacted Anthony John Machado, a custom jewelry maker from South Florida, to make something noteworthy that players could show off from the sidelines. He created a giant, 5.5 lb. gold chain with a sapphire-encrusted Miami "U" logo.

"They wanted to bring a little of that swag bag," Machado told the Los Angeles Times. "It's a fashion statement."

So, how do players earn the right to this piece of ice? Any defensive player who recovers a fumble or intercepts a pass is allowed to wear it on the sidelines until the defense takes the field for the next set of downs. (Man, it'd really sting if you recover a fumble and then your quarterback throws an interception on the next play. But, I guess that creates motivation to get to wear it again for longer.) 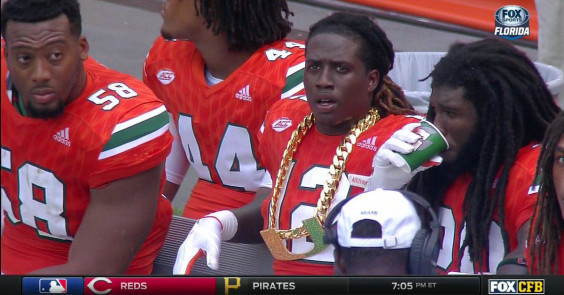 It must feel pretty cool to sport the Turnover Chain on the sidelines. | Credit: SB Nation

The U isn't the only school using what the LA Times is calling "sideline swag."

The University of Mississippi gives receivers a wrestling championship belt (something Alabama used as well), and Texas A&M lets players use the drum major's mace to celebrate especially big moments.

Back in the 1990s, Virginia Tech gave its most valuable defensive player of the week an old lunch pail.

Since items like championship belts and other props have increased in popularity recently, schools are constantly trying to one-up each other on the sidelines as well as on the field.

The University of Georgia gifted some defensive players with a gold, spiky set of shoulder pads with the word "savage" on the back that looks like something from an Oakland Raiders home game. 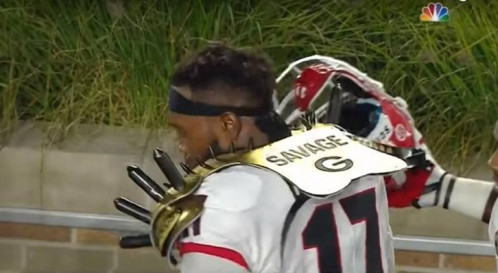 These pads are definitely not safe for the game, but they're awesome on the bench. | Credit: Macon.com

A Vols staff member holds up a trash can over their head when the defense goes out on the field. If they force a turnover, the key player will grab the ball and slam dunk it into the trash an.

And, when these fun little bits of school spirit and local folklore (that's hard to say out loud) grow in popularity, there's always a way to monetize it. "Turnover chain" T-shirts and fake versions of the Miami chain have been spotted in the stands.

Coordinated T-shirt giveaways for things like "White Out" events are fun and effective, but it's always exciting to do something a little extra and give a team its own sense of identity. Who knows? It could become the next school tradition for generations.