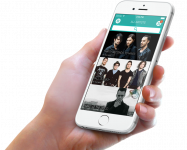 People love picking up T-shirts from concerts. Not only is it a way for fans to show how much they love a group or artist, it also is a keepsake that commemorates a fun evening. However, those lines at the merch stand after the show can be heinous. To stop this, an app called SideStep is letting fans preorder merchandise, like T-shirts, before they even get to the concert.

According to Forbes, SideStep partnered with Ticketmaster to notify fans who purchased tickets to certain shows that they can buy merchandise online before the show. When fans preorder the items, the bands know exactly which items to bring, so it helps out both the sellers and the customers.

Forbes reported that in one of these email blasts, SideStep saw a 45 percent open rate on more than 26,000 emails sent and about 8 percent of recipients ended up using the service to purchase stuff. At one particular show, the band 30 Seconds to Mars sold an additional $5,000 in merchandise than they usually do thanks to SideStep.

SideStep's founder, Eric Jones, spent time playing in bands, and told Forbes that he recognizes the impact that merchandise sales can have on big-name bands and fledgling artists alike.

"What I experienced as an artist made me realize how many things were missing from the merchandise experience and how much data was not being collected, so SideStep was a no-brainer," he told Forbes.

The app has partnered with bands, such as Fall Out Boy, Panic! At the Disco and The Maine.

Do you think this could be a game-changer in the promotional merchandise world? Let us know in the comments.