Signs.com Huddled 157 People Together to Draw NFL Logos From Memory

Thanks to their thrilling 41-33 Super Bowl LII victory over the New England Patriots, the Philadelphia Eagles soared higher than any other National Football League (NFL) franchise this season, and fans have helped the champions make merchandise history through their all-things-Birds purchases. Now that the nation knows of the depth of talent in the City of Brotherly Love, perhaps the franchise’s promotional symbol will become etched in the minds of millions, as the current emblem, in use since 1996, came in last in a study through which Signs.com asked pigskin fans and non-gridiron-action-obsessed folks to draw 12 franchises’ logos from memory.

Akin to a 2017 experiment through which the same curious team of “sign, design and tech nerds” tested consumers’ recollections of popular brands and companies, the recent gathering of 157 people ranging in age from 18 to 64 looked to see just what sort of space the NFL identifiers take up in our long-term memories. Professional football teams, just like any entity with an eye on acquiring lasting admiration, often change their logos, so the roundup of football-frenzied individuals and their study contemporaries made for a neat endeavor, especially since the Eagles’ initial Big Game breakthrough capped an interesting campaign, leaving us without any action until the summer. (Hey, though, pitchers and catchers report to spring training next week.) 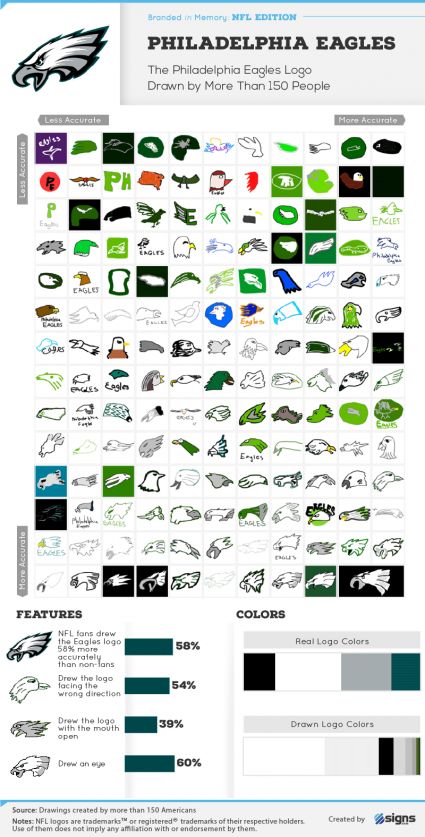 In having participants draw the logos of the Atlanta Falcons, Chicago Bears, Dallas Cowboys, Denver Broncos, Green Bay Packers, Minnesota Vikings, New England Patriots, New York Giants, Pittsburgh Steelers, San Francisco 49ers, Seattle Seahawks and the Eagles, Signs.com selected a dozen highly prominent organizations, with 10 of them having won the Lombardi Trophy and the Falcons and Vikings presently fielding teams whose efforts could one day lead to a championship parade for their cities, too. In geeking out over the findings, yours truly, with absolutely zero artistic talent, knows that my drawings would have stunk, but the Signs.com people sought accuracy and not necessarily the second coming of Vincent van Gogh.

Offering interesting histories of the clubs’ logo alteration, the Salt Lake City-based group discovered through its Branded in Memory brainchild that many people struggled to craft “near-perfect” and “good” representations of the football logos (I would like to meet many of the drawers, thinking we could make some solid stick figures together). Artistic considerations aside, the output is quite interesting, especially when one looks at the differences in the scores of fans versus non-league aficionados and the gulf between certain franchises’ figures. For example, the Eagles had the largest percentage cap between the aforementioned study contributors, with zealots being 82 percent more accurate in their handiwork than those whose Sunday afternoons and Monday nights do not revolve around seeing touchdowns and tackles. But, the Birds, taking all study measures into consideration, brought up the rear on the findings chart, with, among other findings, only three percent of the pool producing near-perfect drawings. With respect to the teams, the designs of the Bears and Packers yielded the most head nod-inducing depictions, which perhaps indicates fondness for the simplicity of the artwork or a strong contingent of National Football Conference North Division fans among the group.

Following the statistical breakdown, Signs.com does a decent job of exploring the psychological and emotional bonds that people have with logos, which Eagles fans have made very obvious this week no matter what the study reveals.

“While fans, like customers of regular consumer brands, may follow the company or team, engage with them on social media and regularly interact with the product or team, it seems this emotional connection, and in some cases a self-identity forged around a team, leads to the ability to recreate logos far better than non-fans and the average person of consumer brands,” the website offers. “This significant finding should be studied by those building consumer brands and how they can imitate creating brands and logos that are truly branded in our collective memories.”

With the sun having set on this season (if baseball is not your bag, the NFL Draft is happening in April), teams will be reloading their rosters in the hope of advancing to Super Bowl LIII. Admirers will take great stock not only in hearing about which acquisitions will be top “draws” and, as this study indirectly shows, they will enjoy seeing how said additions will build their squads’ brands. Now, to the Eagles’ victory parade we go!